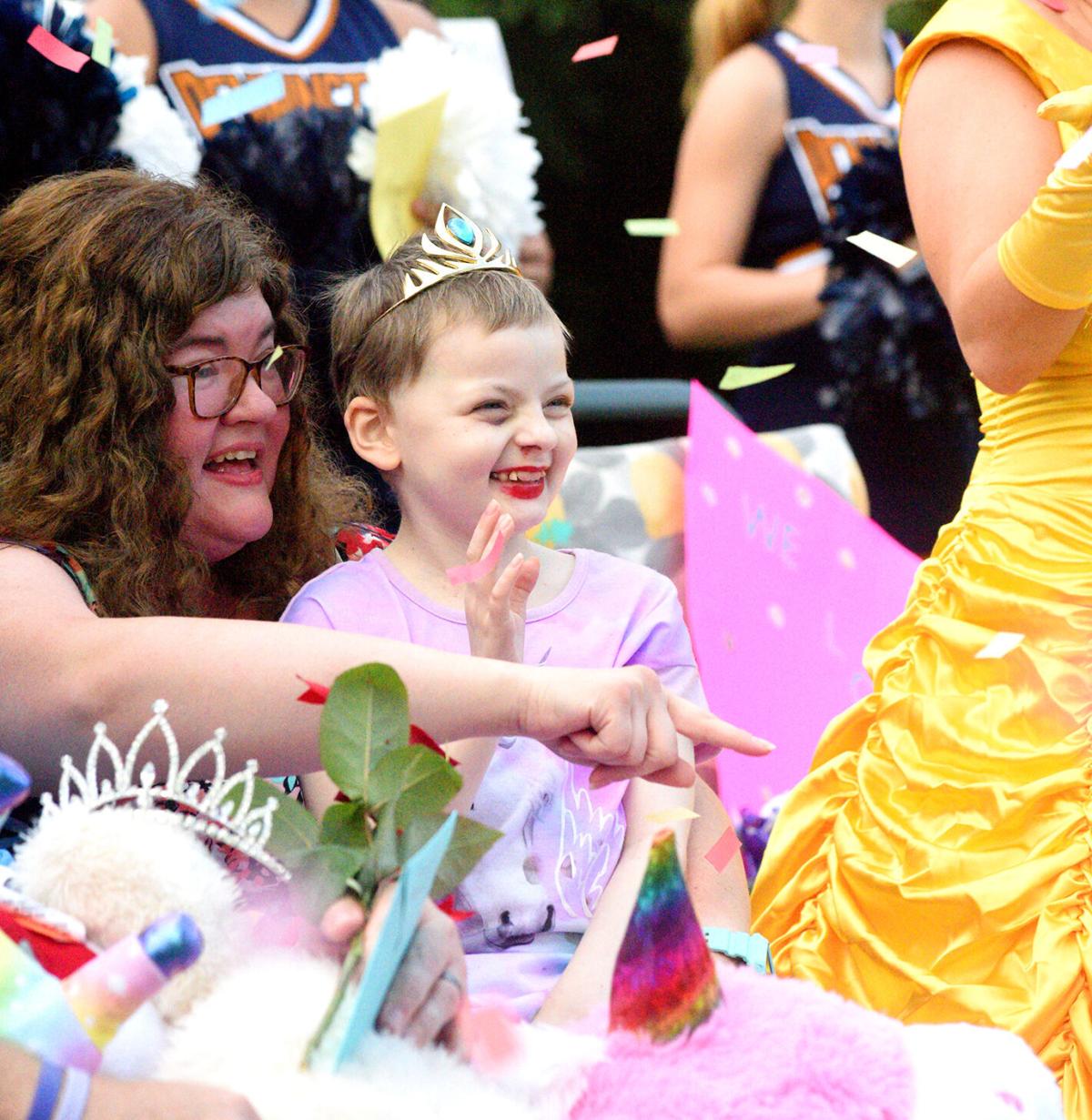 Surrounded by confetti, princesses, and unicorns, Lillie Handley, 8, and mom Kelly wave to well-wishers a during a parade in Lillie’s honor Wednesday evening at their home in Holly Pond. 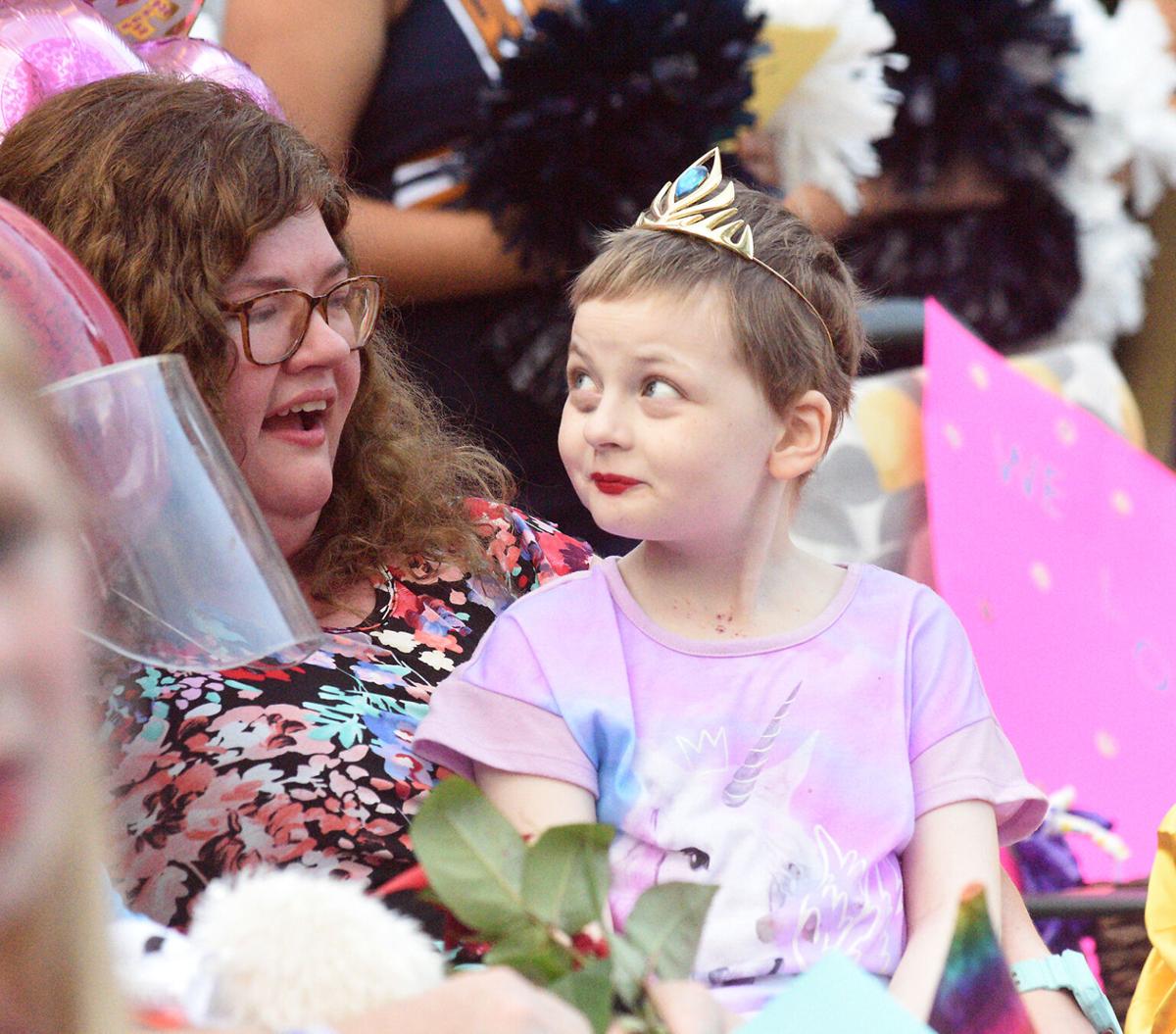 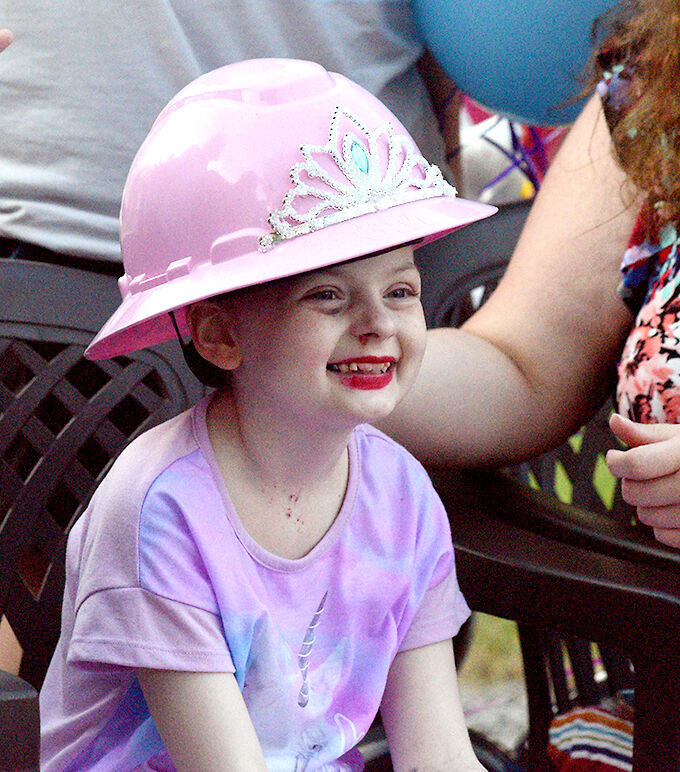 Lillie Handley is all smiles wearing her custom princess helmet presented to her by members of the Cullman Electric Cooperative. 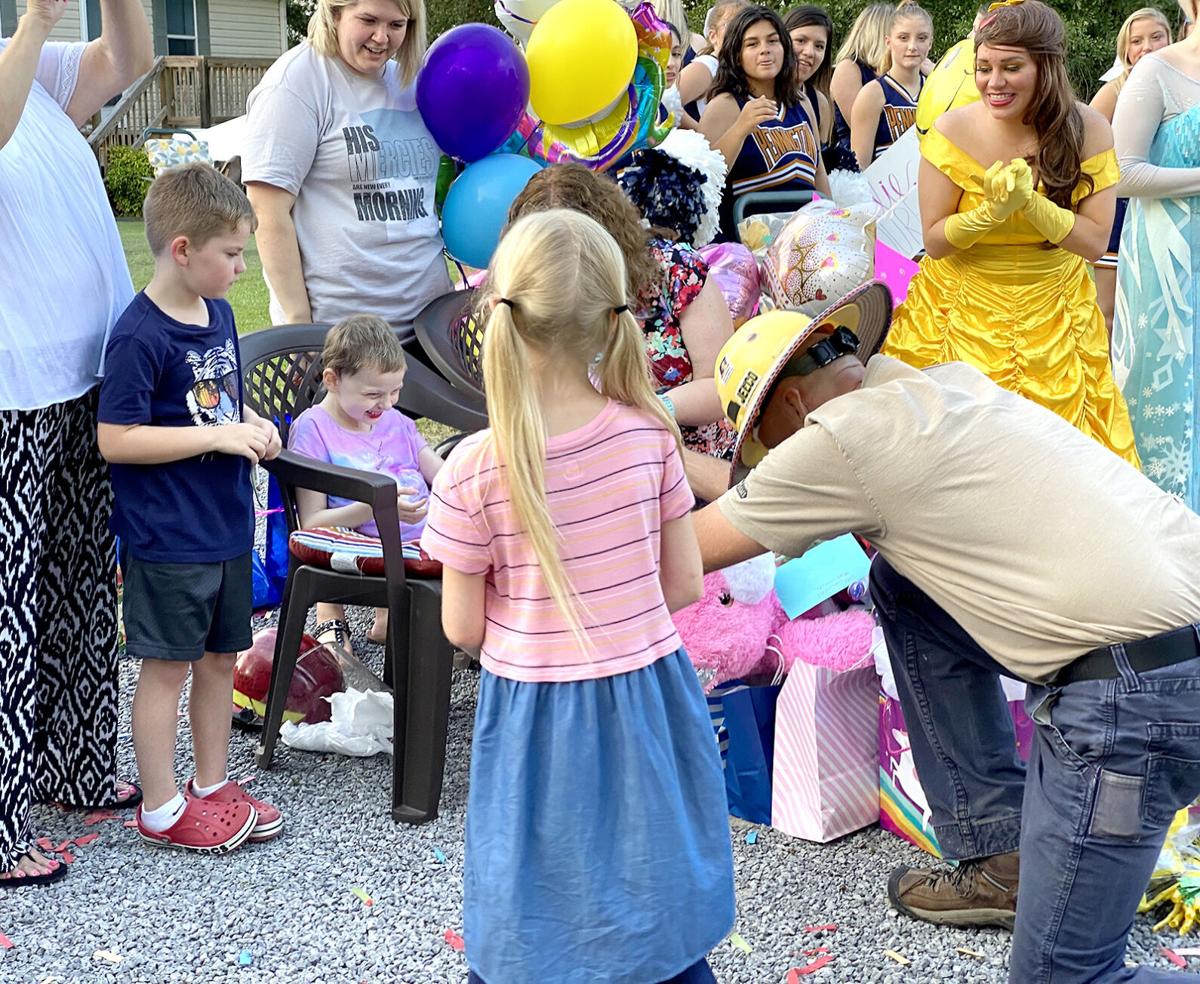 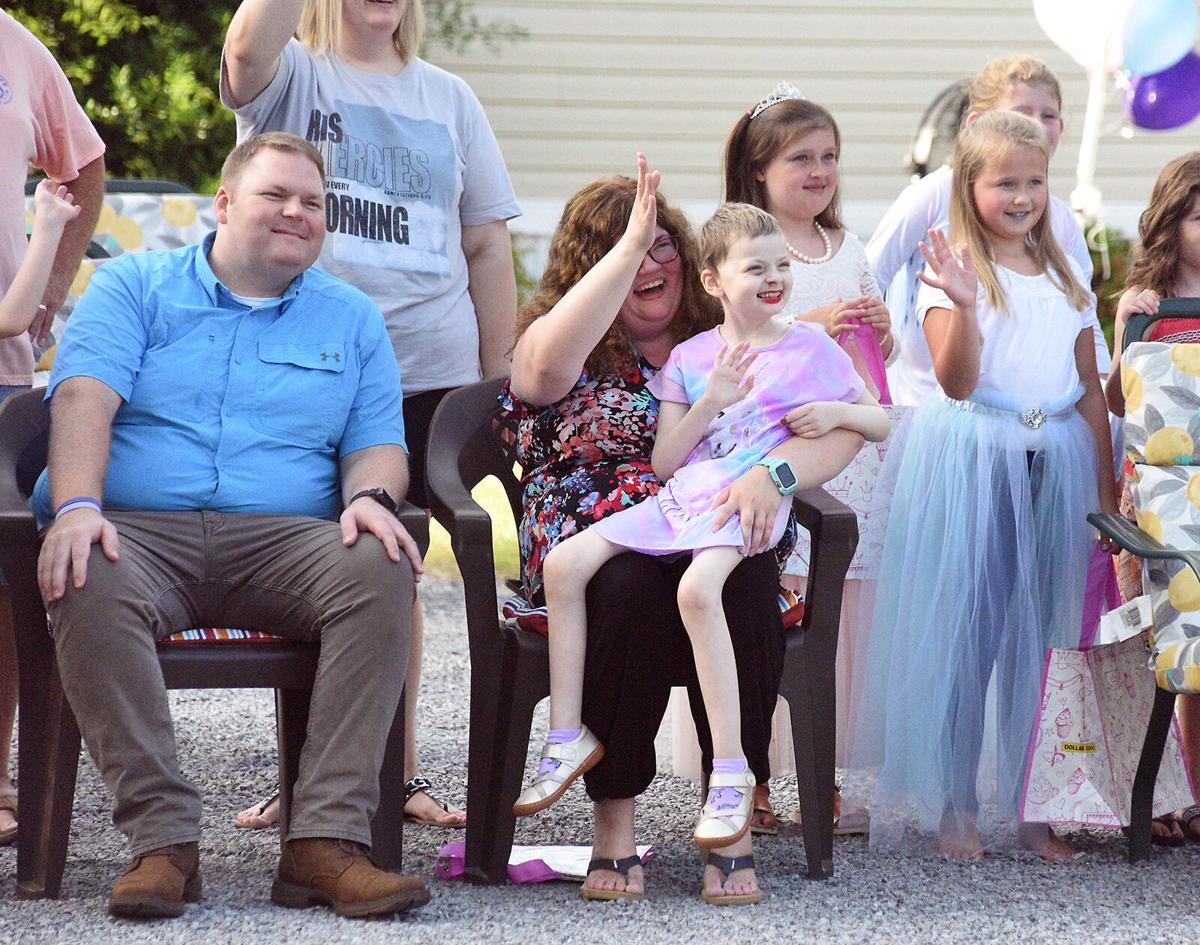 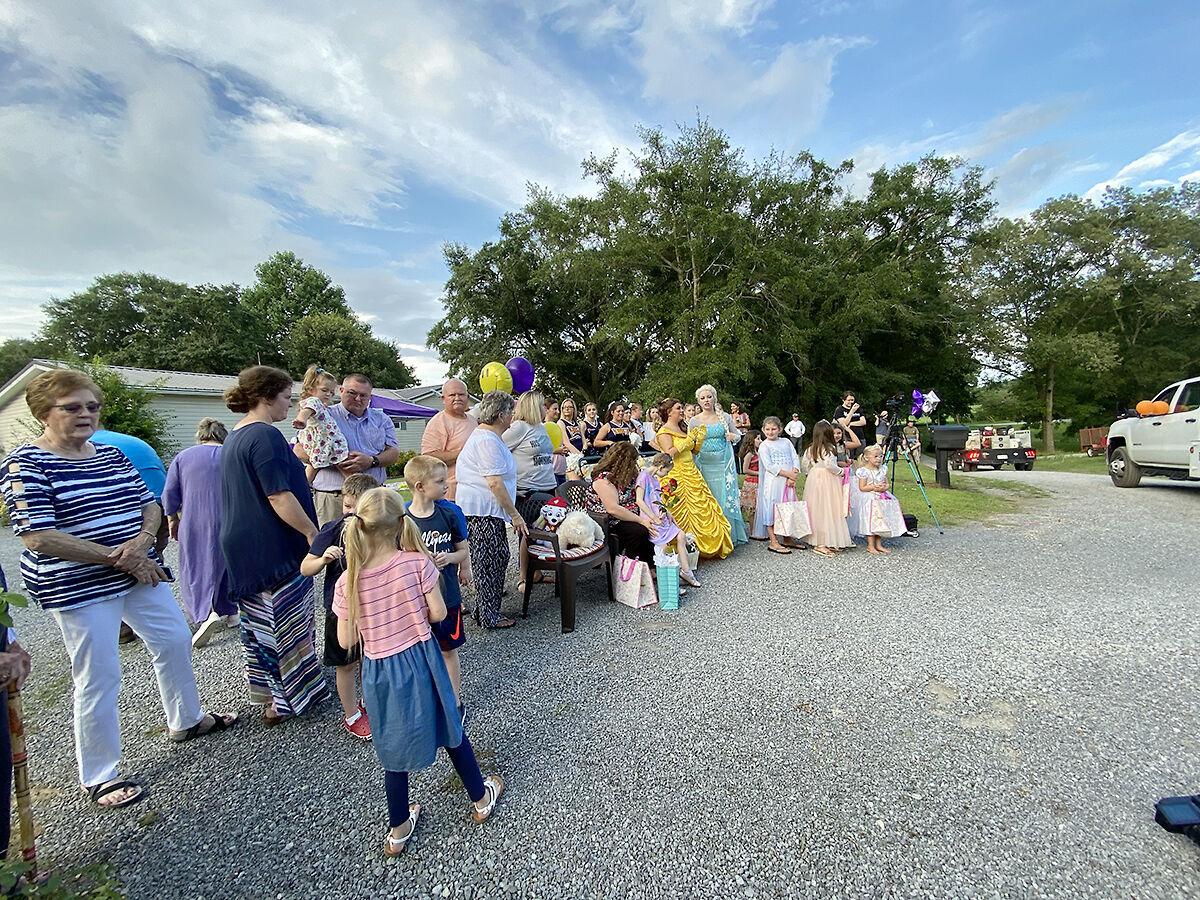 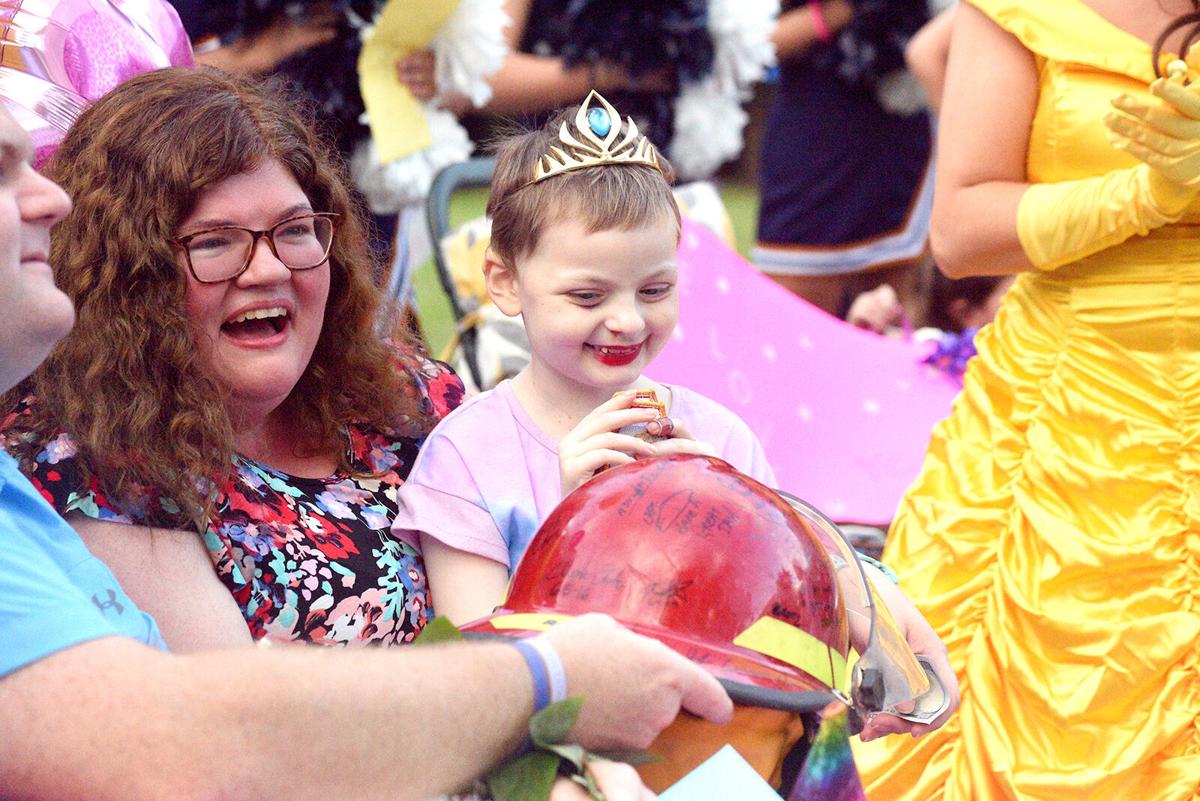 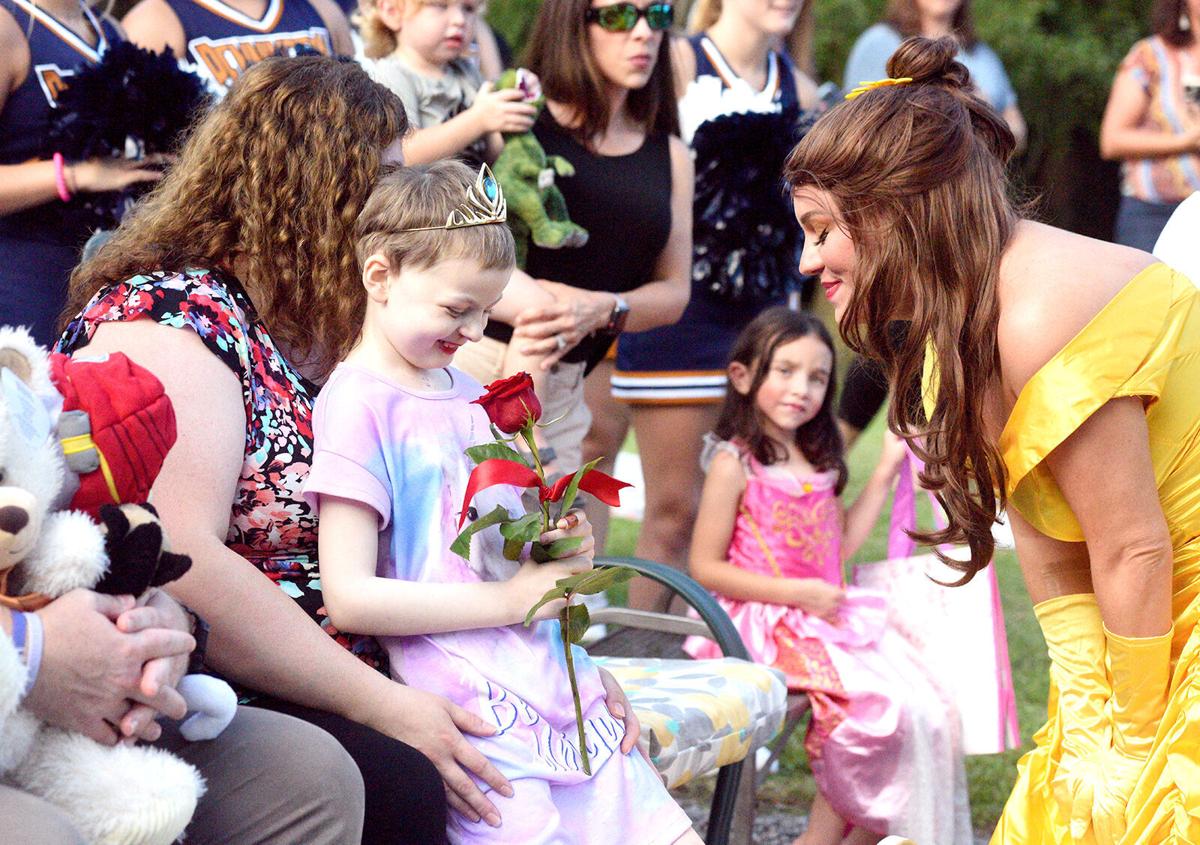 Lillie Handley, 8, receives a rose from “Belle” during a parade in Lillie’s honor Wednesday evening at her home in Holly Pond. 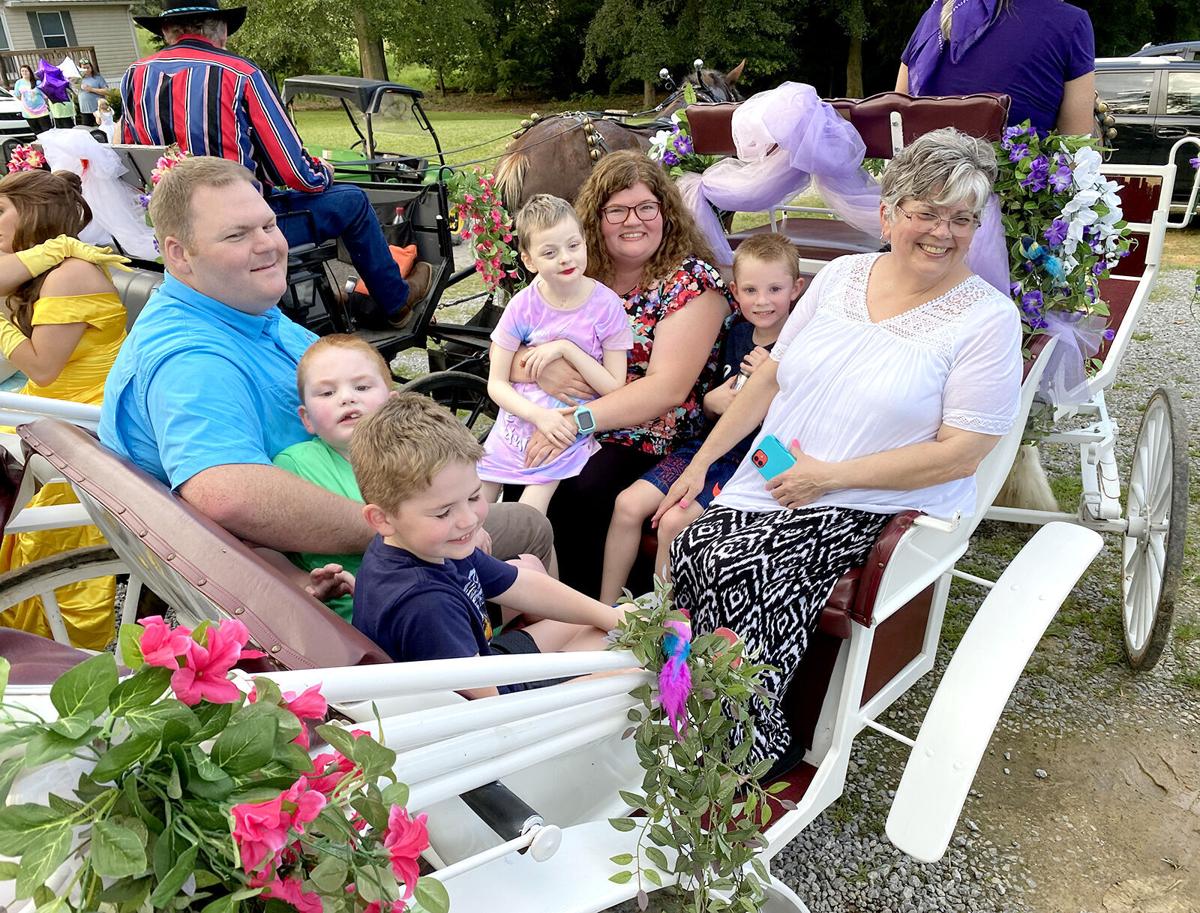 Lillie and her family prepare for a carriage ride after a parade in her honor Wednesday evening.

Surrounded by confetti, princesses, and unicorns, Lillie Handley, 8, and mom Kelly wave to well-wishers a during a parade in Lillie’s honor Wednesday evening at their home in Holly Pond.

Lillie Handley is all smiles wearing her custom princess helmet presented to her by members of the Cullman Electric Cooperative.

Lillie Handley, 8, receives a rose from “Belle” during a parade in Lillie’s honor Wednesday evening at her home in Holly Pond.

Lillie and her family prepare for a carriage ride after a parade in her honor Wednesday evening.

HOLLY POND — On Wednesday, a community showed up en masse to show their love for 8-year-old Lillie Handley, a Holly Pond girl who has been battling cancer since she was three. The princess-themed parade was fitting for girl who loves being a princess at an annual Princess Party.

“She’s our princess every day, but on this day, she’s everybody’s princess,” said Lillie’s mom, Kelly.

Lillie had never experienced a parade before due to her compromised immune system, but on Wednesday, more than 500 well wishers in cars, motorcycles, trucks, carriages, fire trucks, police cars and on horseback came to express their love.

For more than an hour, they crawled past her house, showering her with candy, toys, and shouts of love and encouragement. Lillie, wearing unicorn jammies and swapping out tiaras as the parade went on, waved back in true princess fashion.

Stories about princesses include magic and heroes. In this story, Lillie is the princess, the hero, and holds all the magic.

“Lillie is the strongest, bravest little girl I’ve even known,” said Kelly. “She’s smiled through everything she’s gone through. She’s just so loving.”

Doctors discovered Lillie had neuroblastoma - a small-cell tumor - in May 2016 after treating her for dehydration following a stomach bug that hit the family. Doctors at Children's Hospital took some extra tests.

“The next day I get a call from my pediatrician’s office saying they had found a spot above her right kidney and I needed to take Lillie for an ultrasound,” said Kelly.

Following several tests, the Handley’s were told they needed to consult with an oncologist. “I thought ‘my baby doesn’t have cancer,” said Kelly. “It was nothing that I had really thought of.”

Lillie started chemotherapy two weeks later. “It was within a two-week span of May, 2016, when all of this happened our lives forever changed,” said Kelly.

After Lillie’s third relapse two years ago, Children’s Hospital told the Handleys there was little they could do for Lillie.

“I didn’t want to give up hope,” said Kelly. “Lillie was still having good days.”

They consulted a specialist in Michigan. The doctor said she wanted to see Lillie in her office in four days. Kelly and her husband John scrambled to make plans to be there.

Kelly said, “I told my husband ‘what if we can’t get all this done?’ He said, ‘We just have to pray about it, and if it’s the Lord’s will, He’ll work everything out.’ And He did.”

Lillie, who is a “wonderful” big sister to her six-year-old twin brothers, continued treatments with Sholler via remote and in-person appointments. She went into remission in December, 2019.

In November of last year, the cancer was back.

They did a few more cycles of intravenous chemotherapy, and Lillie was able to go back on oral medications.

Four weeks ago, during a visit to Charlotte, where Sholler had relocated to, Lillie’s scans came back “inconclusive” and the Handleys were faced with decisions about what came next.

“The biggest thing John and I have always said about Lillie is that we wanted her to have good quality of life, and if it ever got to the point where her disease was progressing more, we didn’t want to continue to do chemo that would make her sick,” said Kelly. They chose to not do more IV chemo, but continue with oral medications.

The Handleys were back in Charlotte a week ago for radiation simulations - and a trip to Target, Lillie’s “absolute favorite store,” said Kelly - when Lillie suffered a seizure.

It was a long day. Lillie was back in the hospital and temporarily on a ventilator. By the end of it, the Handleys got the news they’d feared. Along with small brain bleeds, Lillie had two new lesions on her brain.

Lillie and her family came home, where she is now on Hospice care.

“All that happened in one day. She was fine and then she wasn’t fine,” said Kelly. There is no timeline for how much longer Lillie has - “Dr. Sholler told me, ‘Hopefully, you’ll have a few weeks,’” said Kelly - so the family is making every day count, doing the things that Lillie loves.

For the past four years, Kelly’s mom, Cheryl Hanes, and her coworkers at Cullman Internal Medicine have thrown a “Princess Party” for Lillie, complete with Disney princesses, a horse-drawn carriage and charming princes.

This year’s princess party, originally scheduled for September, has been moved up to this Saturday.

“I want her to have good days and not worry about anything,” said Kelly.

Waving to her loyal subjects as they paraded by on Wednesday, it was clear Princess Lillie was having a really good day.