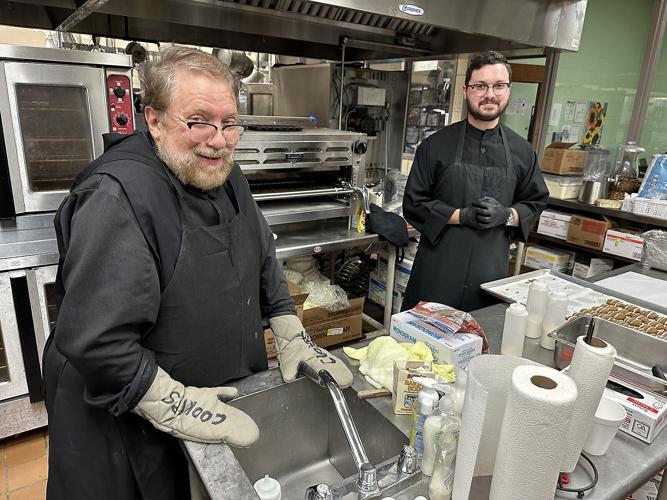 Br. Christopher McBride, left, and Postulant Devin keep the dough fresh and the oven ready in the kitchen at St. Bernard Abbey, where the monks are ramping up their recent new foray into the culinary craft of baking cookies. 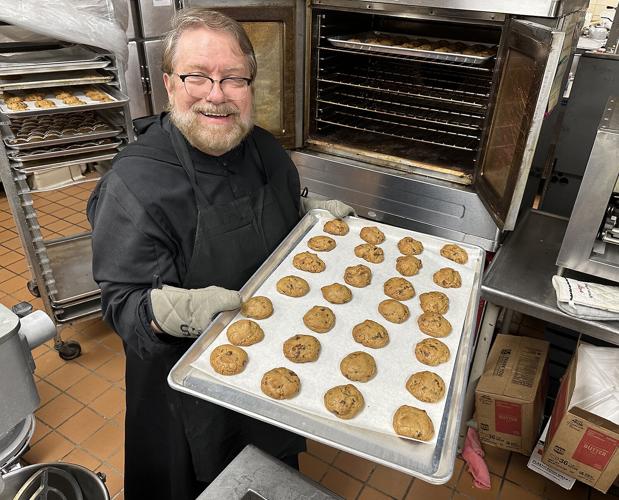 Br. Christopher McBride, left, and Postulant Devin keep the dough fresh and the oven ready in the kitchen at St. Bernard Abbey, where the monks are ramping up their recent new foray into the culinary craft of baking cookies.

Cullman’s St. Bernard Abbey already is known for its monks’ bread. Made on the grounds of the 130 year-old monastery, it’s a treat whose popularity always makes it seem scarcer than it really is. After all, it’s available for sale on site, right inside the gift shop at the Ave Maria Grotto.

But baking isn’t all about bread. Two years ago, Fr. Bede Marcy, the director of the dining hall at St. Bernard, spearheaded the idea to add some sweetness to the mix.

“At the Grotto, we had been selling a lot of cookies from another monastery, so I kept reporting to Fr. Bede how great those sales were doing,” explains Br. Christopher McBride, the monk who oversees the abbey’s increasingly popular cookie-baking vocation. “So about two and a half years ago, we started making cookies — and it’s been a success.”

A bite into any of the abbey’s half-dozen or so cookie varieties takes all the guesswork out of why that might be. Baked in limited batches three times weekly in the St. Bernard kitchen, they’re anything but cookie-cutter creations.

“Compared with store-bought cookies, these don’t have preservatives in them,” says McBride. “They’re made from natural ingredients. and they’re not sickeningly sweet — which, right away, makes them ‘healthy!’”

He’s joking, of course, so don’t race to the Grotto’s gift shop with visions of chewing your way to a slimmer waistline. But St. Bernard’s cookies are definitely distinct from the disappointing discs that often tumble out of your average mass-produced, store-bought box — and that difference has the monks selling the kitchen’s newest hot property as fast as they’re able to make them.

“We send them out with the priests when they go on parish assignments on the weekends,” says McBride. “I have these big tubs that I’ll put about 30 boxes of cookies in — and when the weekend is over, the tubs come back empty.”

The cookies are still a relatively new addition to the abbey’s retail lineup, but already there are plenty of flavors to choose from. “We’ll probably have about five types available for the spring,” says McBride, naming off a tally of tastes that includes lemon snowball, orange drop, and shortbread, alongside chocolate chip and seasonal offerings like Pfeffernusse — an aromatic, molasses-sweetened traditional German cookie characterized by its spicy blend of clove, nutmeg, and Vietnamese cinnamon.

Mixing a single batch of cookie dough typically takes the monks 20 to 45 minutes, depending on the type. Then there’s the boxing, which requires an additional 30 to 45 minutes. “There’s a wrong way to box the cookies,” says McBride, betraying an evident caretaker’s eye for details. “You want the presentation to look good; you want the box to look full. You want someone to look at the package and think, ‘I want to try those!’ With the Monks bread, they have that mastered. We’re trying to do the same thing now with cookies.”

If you haven’t spotted St. Bernard’s cookies out in the wild yet, chances are you will sometime soon. The monks, who recently purchased a commercial-grade cookie depositor to ramp up their productivity, plan to make their homemade treats available at local farmers markets and seasonal festivals (including this year’s Bloomin Festival), right alongside their popular Bernard’s Best monks’ bread.