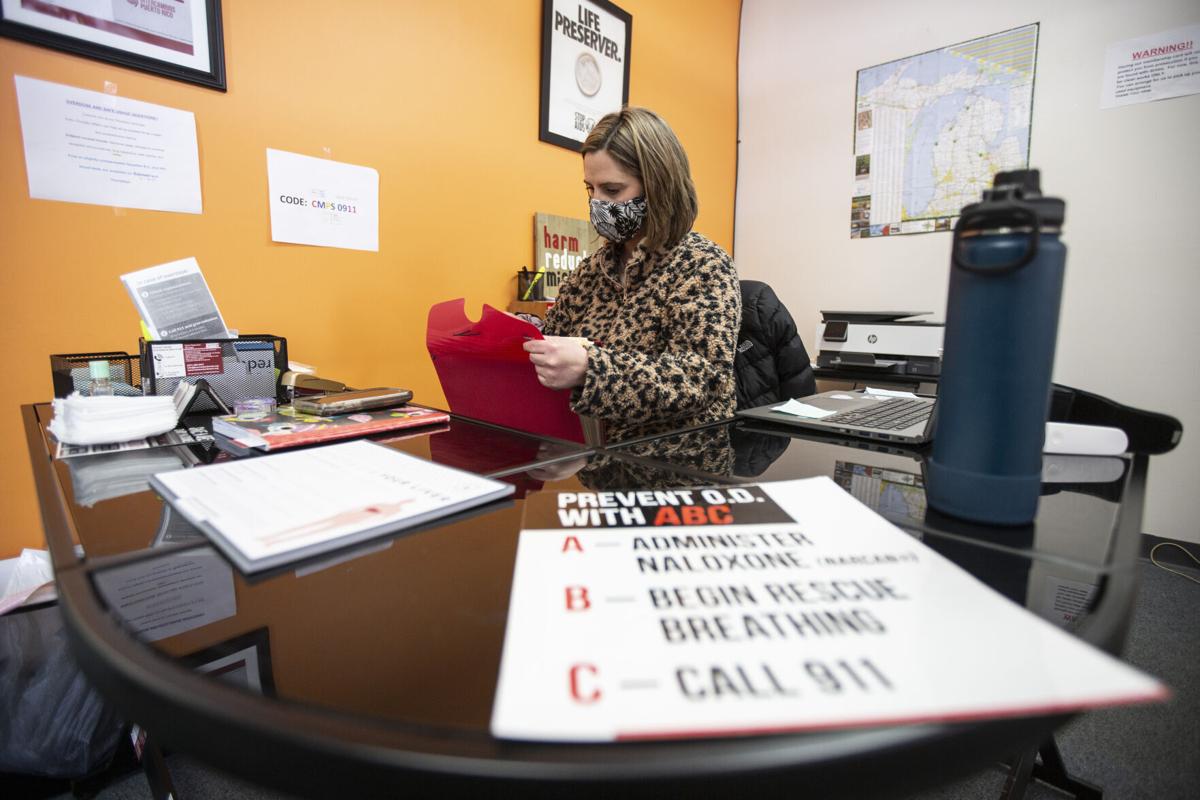 Phlebotomist Michelle Winberg retrieves a paper from a folder at Harm Reduction MI in Cadillac on Friday. 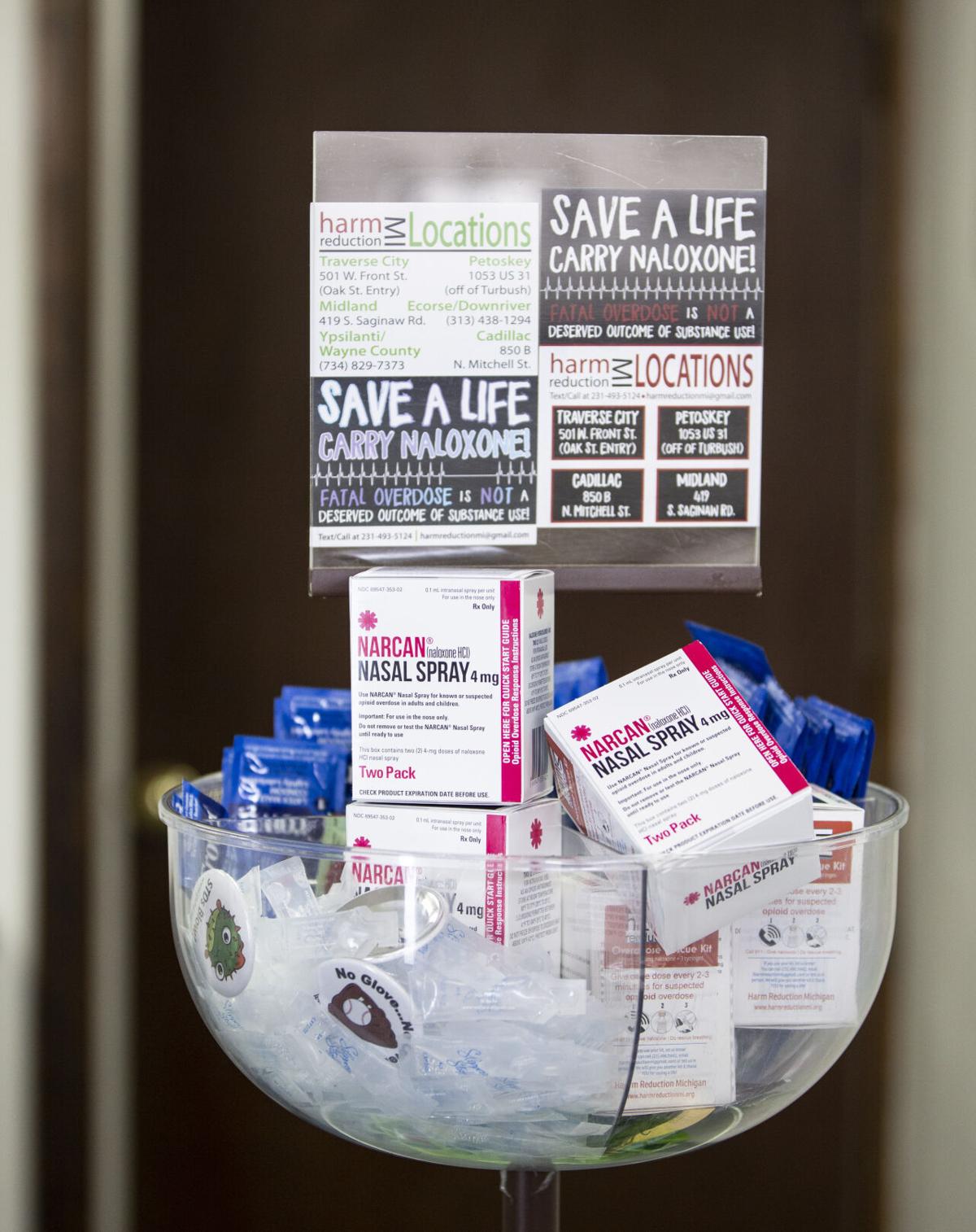 Narcan and condoms are displayed at Harm Reduction MI in Cadillac on Friday. 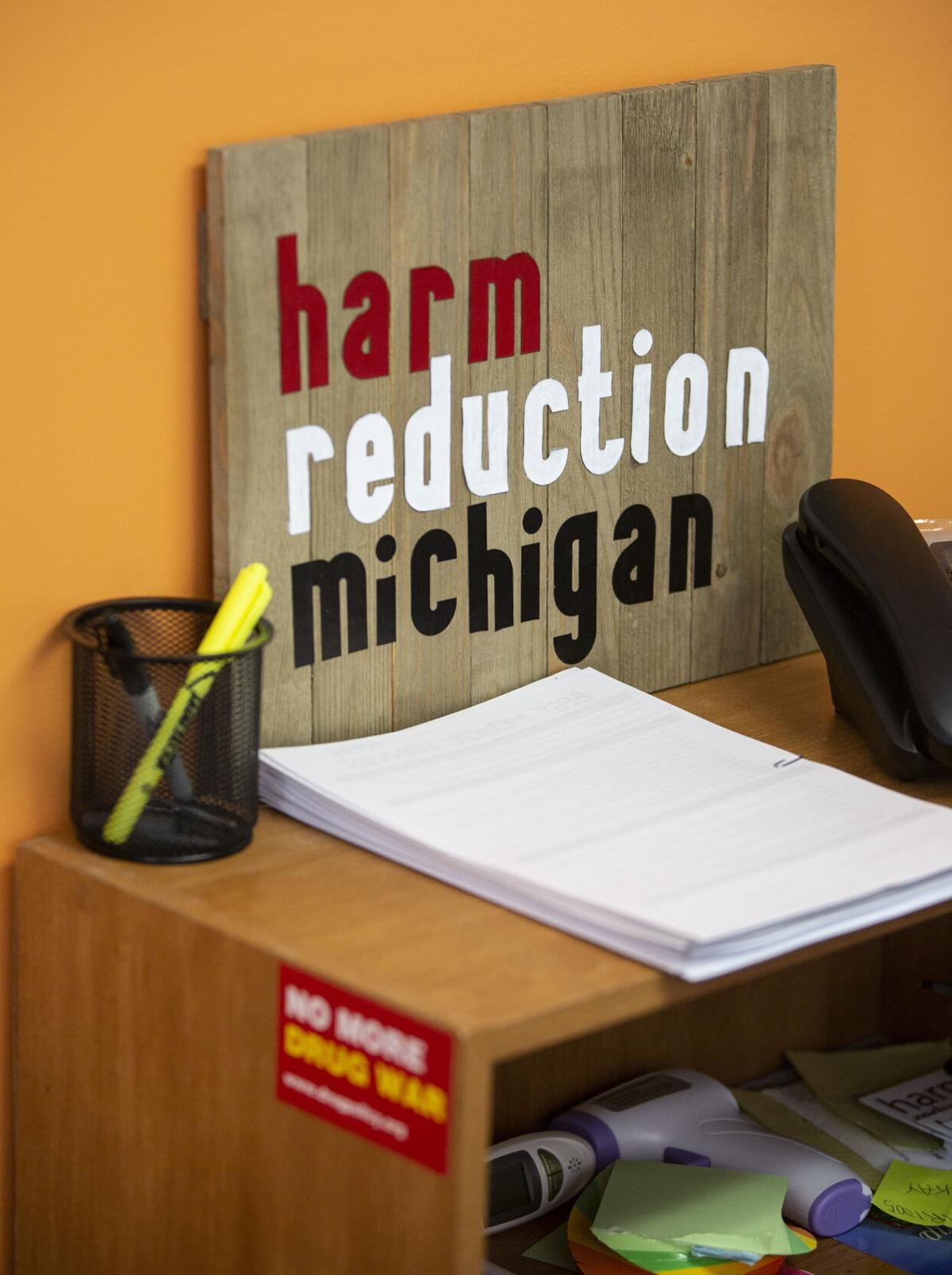 A sign at Harm Reduction MI in Cadillac on Friday. 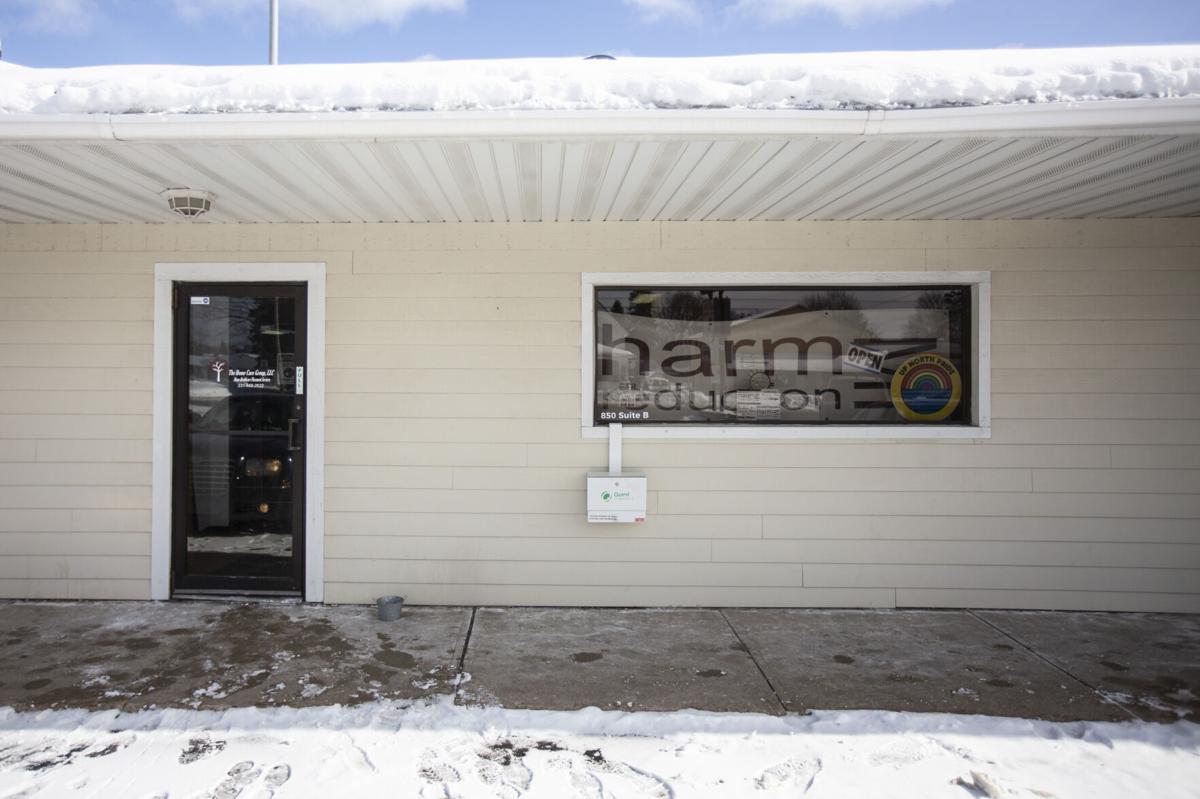 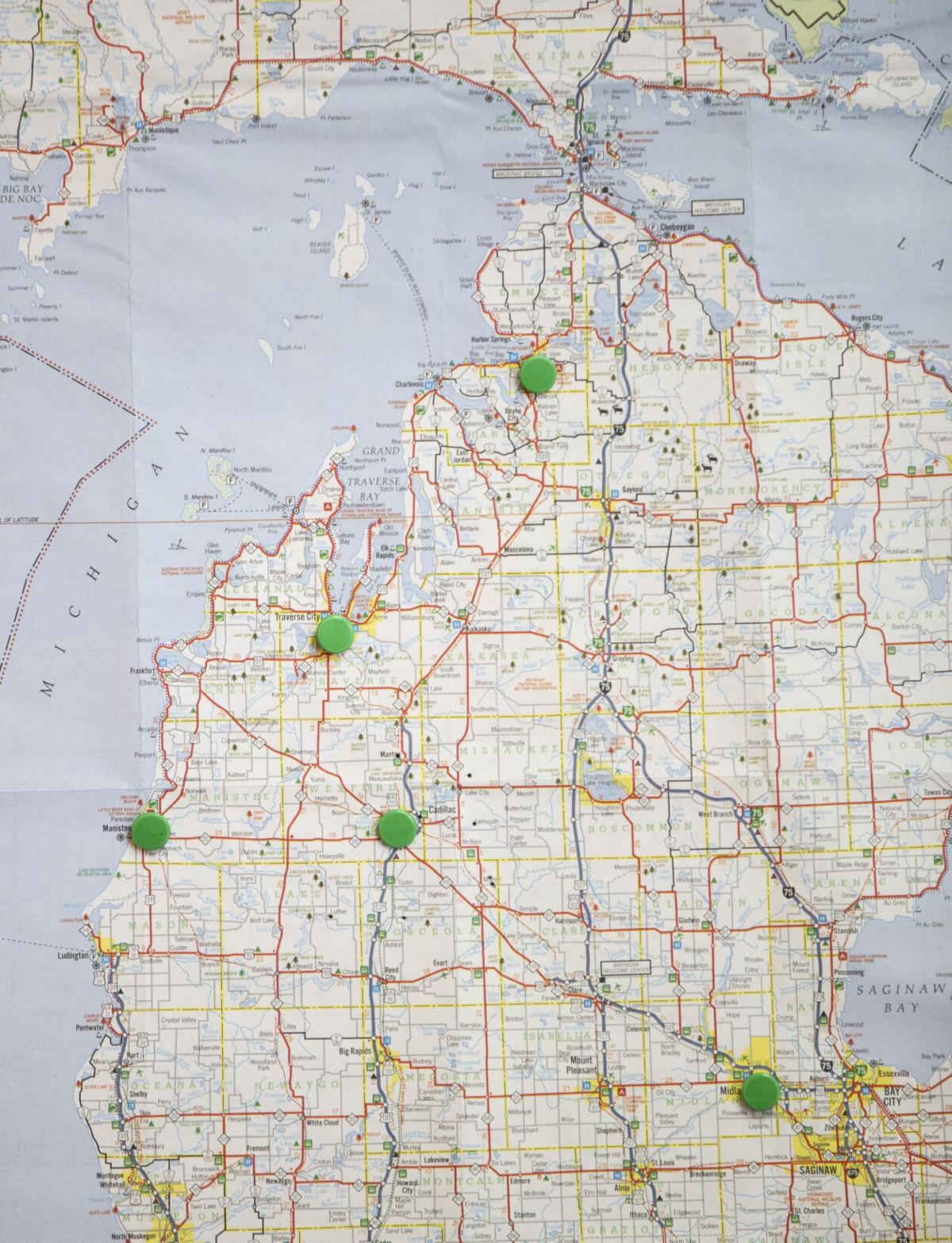 A map displays Harm Reduction MI’s locations at their Cadillac location on Friday. 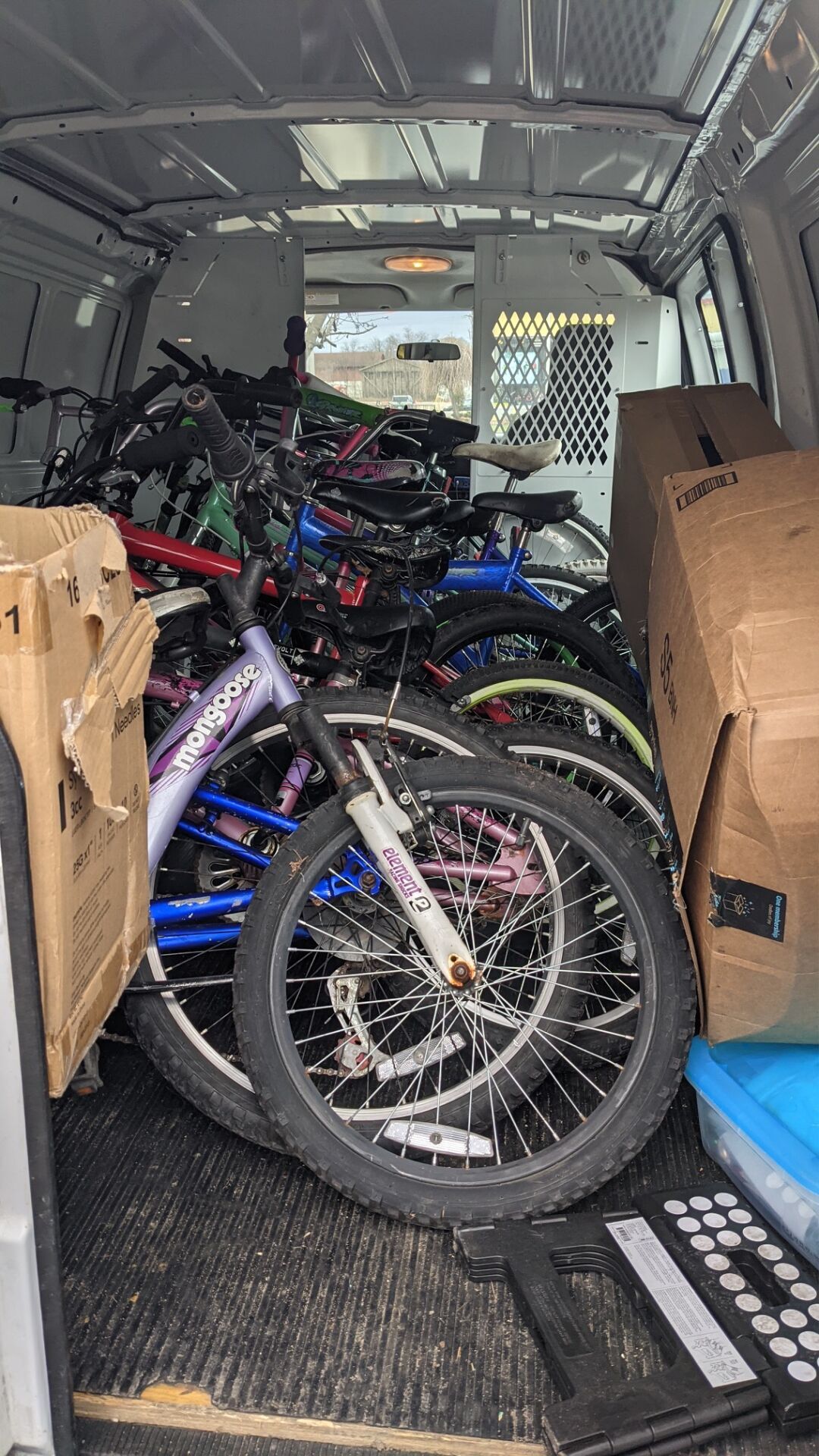 Bikes repaired by Harm Reduction Michigan, a non-profit providing services for those affected by addiction, packed and ready for transport. 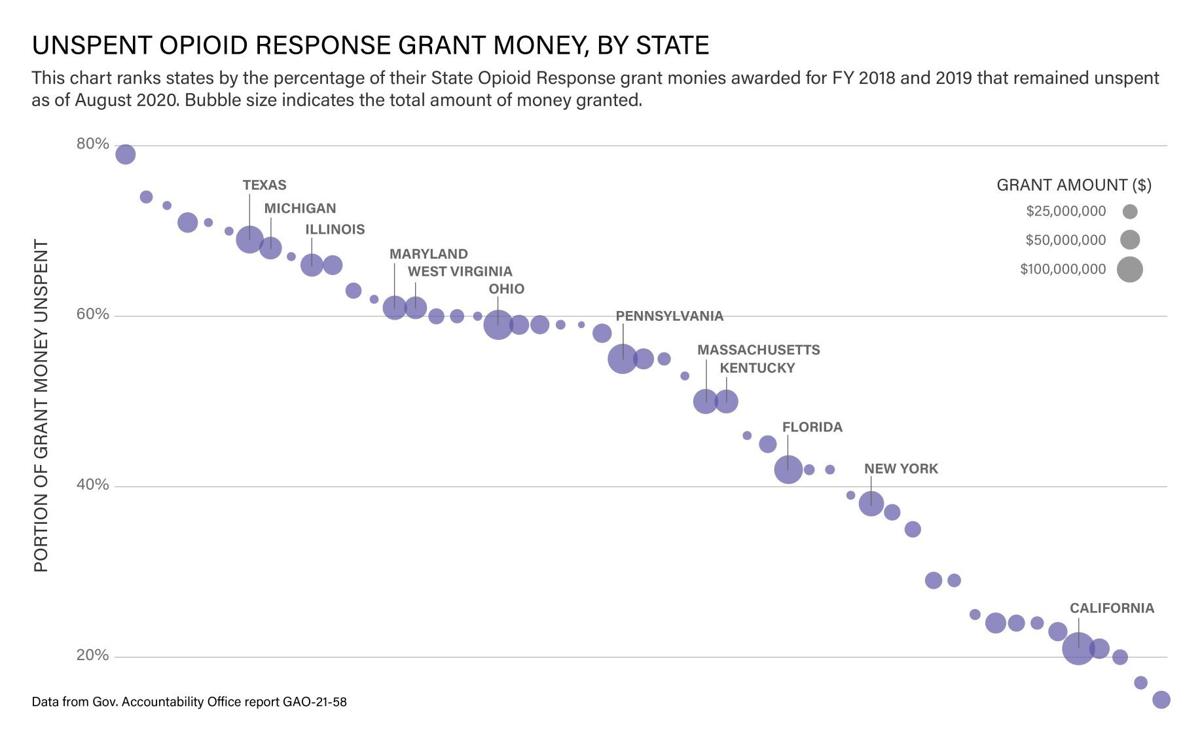 Phlebotomist Michelle Winberg retrieves a paper from a folder at Harm Reduction MI in Cadillac on Friday.

Narcan and condoms are displayed at Harm Reduction MI in Cadillac on Friday.

A sign at Harm Reduction MI in Cadillac on Friday.

A map displays Harm Reduction MI’s locations at their Cadillac location on Friday.

Bikes repaired by Harm Reduction Michigan, a non-profit providing services for those affected by addiction, packed and ready for transport.

That was late last fall.

The contradiction barely elicits a shrug from Lynch, who runs Harm Reduction Michigan, a nonprofit serving people and communities impacted by addiction.

“Within harm reduction organizations, we're used to doing things on a shoestring,” Lynch said. “Because, for decades, traditional funding hasn’t been available to us. And it still isn’t.”

Harm reduction refers to a set of practices aimed at reducing overdose deaths and involving people who’ve experienced addiction in decision-making about the services and programs developed to help them.

Leaders of federal and state agencies long emphasized abstinence to treat addiction, though in recent years have started to accept some harm reduction-pioneered strategies, such as syringe exchanges and the distribution of naloxone, an overdose reversal drug.

Overdose education and naloxone distribution was identified as a “growth area” for future programming in a 2019 financial report by an office within the Michigan Department of Health and Human Services.

Since 2017, when the opioid crisis was declared a national health emergency, federal funds — $160 million of which have been awarded to Michigan — prioritize traditional, established organizations over their more grassroots counterparts, documents show.

Some in the private sector say instead of relying on tradition or professional connections, public and private funding should be based on proof of a strategy or program’s prior effectiveness.

“Access to evidence-based treatment for behavioral healthcare continues to be a significant challenge,” said Courtney Hunter, vice president of state policy for Shatterproof, a national nonprofit focused on addiction, healthcare and recovery issues.

“The evidence is clear that medication is one of the strongest tools to combat the opioid crisis,” Hunter added, “yet access has been hamstrung for the past 20 years as overdose deaths have continued to skyrocket.”

Evaluations on how the money is used were completed by Wayne State University’s School of Social Work and by MDHHS’ Office of Recovery Oriented Systems of Care.

Both issued reports identifying accomplishments and challenges, one of which some may find surprising — spending all the money.

Michigan isn't the only state where this was a problem, as detailed in a report published Dec. 14, 2020 by the U.S. Government Accountability Office.

While Lynch was seeking $20 and $50 donations on social media to fix bikes for people who’d lost their driver’s licenses, the U.S. Government Accountability Office was finalizing a report, GAO-21-58.

It shows as much as 68 percent of one grant Michigan received, and 20 percent of another, together totaling more than $50 million, hadn’t been spent on schedule.

MDHHS officials acknowledged as much but said unspent funds have now all been allocated to grantees and there are legitimate reasons for the delay.

“The influx of funds requires substantial efforts out in the field to build the infrastructure to support the additional services,” said Bob Wheaton, an MDHHS spokesperson. “Hiring of staff, expansion of programming, training in the evidence-based interventions all take time to establish.”

Most funds were routed through MDHHS, which allocated money to the state’s 10 Prepaid Inpatient Health Plans, where each office’s staff chose regional and local programs to fund.

Harm Reduction Michigan was not funded — Lynch said the organization is not an approved provider, a status she said she hopes to change in the future.

In recent years Harm Reduction expanded and now has a Cadillac location, thanks to donations from individuals and grants from private organizations like Vital Strategies, a re-granter for Bloomberg Philanthropies.

Federal law allows grant funds to support syringe exchanges, but not to purchase the syringes themselves, even if proved effective in hepatitis and HIV/AIDS prevention.

“It's not only that some organizations don’t understand the problem— it's also that the target populations don’t trust them because they don’t have the experience themselves and because they’re often tied in to the criminal justice system,” Lynch said.

Measurable results in some grant awards

Wayne State and MDHHS evaluations of grant expenditures showed millions spent on meetings, conferences and training — some of which were necessary, others that duplicated efforts and had low attendance.

“Michigan OPEN is an effort that was started to try to improve opioid prescribing in the state of Michigan,” said Dr. Michael Englesbe, co-director and a professor of surgery at the University of Michigan Medical School.

“It came about from an observation that many opioid overdoses started off with vulnerable people getting prescribed opioids by dentists and surgeons.”

Englesbe said some opioid prescriptions are down by at least half, thanks to evidence-based prescribing that has patients recovering from gall bladder surgery, for example, going home with 10 pills instead of 40.

"I think one advantage we had, we were able to mobilize funds really quickly and translate that into services in the community because we already had an extensive network of providers," Petoskey said.

In 2018, the latest year for which figures are available, 2,011 people died in Michigan of an overdose involving at least one opioid, data from the Centers for Disease Control and Prevention shows.

The COVID-19 pandemic is expected to increase these numbers — hospital emergency rooms reported a 33 percent surge from April to May 2020, MDHHS said.

Communications between organizations receiving federal grants wasn’t great, and neither was the process of collecting the data needed to understand what worked and what didn’t.

“Currently there are over 30 different opioid related coalitions and task forces spread throughout all 83 counties in Michigan,” one report stated. “Lack of direct collection in the field limited the amount of detailed information collected from the local sector.”

Michigan should soon have another chance to target the opioid crisis and perhaps adjust funding decisions.

In November, the U.S. Department of Justice announced an $8 billion settlement with Purdue Pharma — $1.75 billion of which the U.S. Treasury earmarked for municipalities, states and tribes, court documents show.

Earlier this month, Michigan Attorney General Dana Nessel was among those from 47 states announcing a $573 million settlement with McKinsey & Co., for the firm’s accused role in aggressive opioid sales strategies.

Michigan will receive $19.5 million of the settlement, a press release from the AG’s office stated, and another case against opioid distributors is still being litigated.

“States must develop a fair and transparent process for how these settlement dollars will be spent,” said Hunter, of Shatterproof. “It is not a given that states will spend this money on evidence-based programs to prevent and treat addiction.”

Lynch said she will continue to utilize creative fundraising strategies to spend on the front lines of addiction.

She used the money she raised on Facebook to buy bike seats and kickstands.

“We took 600 overdose kits and 15 bikes to an overdose center in Lansing,” she said.

When the snow melts, Lynch said she's confident she can find people to help her fix more donated bikes and get them back on the road.

A report from an office of Michigan Department of Health and Human Services, tracking expenditures from one of three large federal opioid cris…