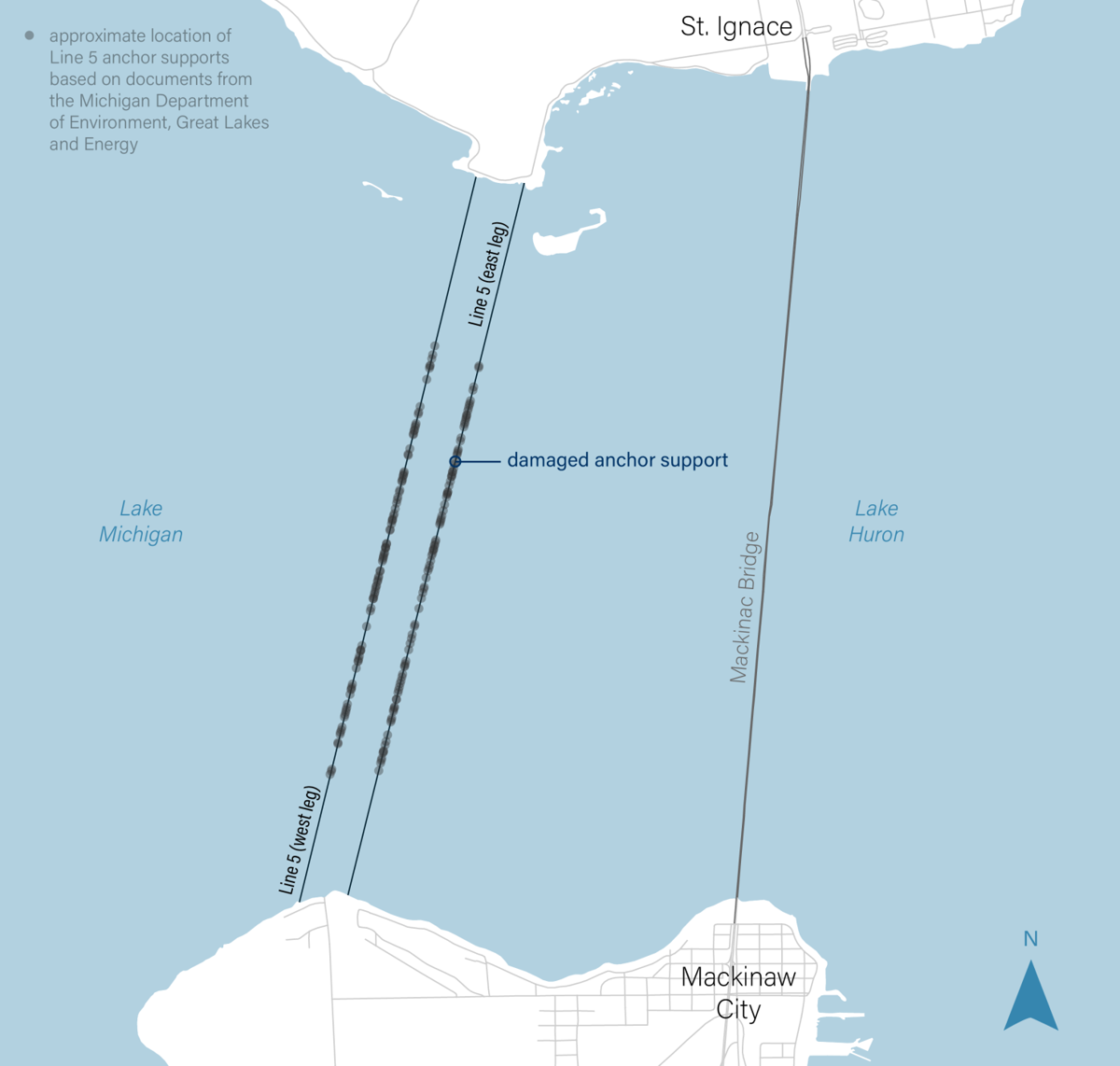 On June 18, Enbridge reported damage to a screw anchor support on the east leg of its Line 5 oil pipeline, which sits on the lake bed in the Straits of Mackinac. This map shows the approximate location of that damage based on documents provided by Enbridge to the Michigan Department of Environment, Great Lakes and Energy.

On June 18, Enbridge reported damage to a screw anchor support on the east leg of its Line 5 oil pipeline, which sits on the lake bed in the Straits of Mackinac. This map shows the approximate location of that damage based on documents provided by Enbridge to the Michigan Department of Environment, Great Lakes and Energy.

TRAVERSE CITY, Michigan — Experts say new damage to a support along the underwater segment of Enbridge Energy's Line 5 oil pipeline is a symptom of a larger structural problem that threatens pipeline's underwater crossing in Lake Michigan.

More than a week has passed since Enbridge Energy reported damage to a screw anchor support on the east leg of Line 5, a dual-pipe span that carries as much as 23 million gallons of oil each day through a miles-long span beneath the Straits of Mackinac. Workers performing maintenance and inspections discovered one of the screw anchors supporting and stabilizing the east leg had somehow shifted south.

The screw anchor, which is on the north side of the Straits in relatively deep water, was bent and twisted in the process.

Enbridge said the pipeline itself suffered “no metal disturbance,” only minor coating damage, but information on what caused the damage still has not been released to public view.

Both legs of the pipeline are temporarily shut down by court order pending a hearing on June 30.

“Enbridge has completed an engineering analysis of the forces applied to the anchor support, and an evaluation of the entire east pipeline for any potential damage,” said a statement on the company’s website. “ROV inspections of the remainder of the east leg have confirmed no damage to the remaining screw anchors and the pipeline itself.”

Will it happen again?

The screw anchors installed under the dual pipelines are meant to support their weight in places where the lakebed has eroded beneath them, and to keep the line from moving back and forth. As of 2018, Enbridge had installed 147 of them. Roughly 200 supports in total have been permitted by the Michigan Department of Environment, Great Lakes and Energy.

In an initial damage assessment provided to the state of Michigan, Enbridge said the force needed to move the screw anchor was relatively small — far smaller than the force needed to critically damage the pipeline. But the company didn’t say anything about what that force could have been. That concerns Ed Timm, a retired professional engineer who has studied stresses on the pipeline for the past 5 years.

“The key point here is ... if nobody knows why it happened how can anybody be sure it won’t keep happening?” Timm said.

One of Timm’s hypotheses is that either thermal expansion or powerful currents moved the pipe south, and then back into its original position, leaving the bent screw anchor behind. He’s raised concerns about Line 5 moving in the north-south direction before. But he said it’s among a number of possible causes for the damage, and it doesn’t look like there will be an obvious answer.

David Schwab, a retired scientist who spent decades at the National Oceanic and Atmospheric Administration and who led the 2016 study modeling the path of a potential oil spill in the Straits, agreed with Timm’s analysis of the situation, and shared his concern.

“The only viable permanent solution to the continuing danger of pipeline damage is decommissioning,” Schwab said.

Timm has long had concerns about the safety of the anchor supports, which, according to documents he obtained, were not part of the original design of the pipeline.

Over the years, the powerful water currents through the Straits dug gaps between the pipe and the lakebed in many places, leaving those sections of pipe to support their own weight and sustain other forces they’re subjected to (external water pressure at depth, internal pressure from their contents, and currents pushing on them from a number of directions).

The danger of buckling is why Enbridge’s 1953 easement with the State of Michigan says there can’t be any unsupported spans of pipe longer than 75 feet (Enbridge has said damage to this particular anchor support did not create such a span).

Calculations from the time showed unsupported pipe spans of greater than 140 feet could fail, and the state halved the limit for safety.

According to Timm, the engineer doing those calculations envisioned a few sporadic spans — not the hundreds now held up by a patchwork of screw anchors and remaining contact points between the pipeline and the lakebed. He said the pipeline is more vulnerable to currents this way.

“From an engineering viewpoint, we’ve gone from a structure that didn’t need to use any of its strength to hold itself up to a structure that’s very akin to a bridge,” said Timm. “And the calculations ... you have to do to determine if something like that is stable, are completely different than they would be for a pipe that’s laying in the mud.”

Timm’s documents show the pipeline design firm, Bechtel Corporation, only realized after the fact that lakebed erosion would be such a problem. It was because at the time, they couldn’t properly measure the currents. Despite improvements in measurement technology, it’s still difficult to measure currents in the deepest parts of the Straits.

In fact, data from Buoy 41575, which sits just west of the pipelines, seemed to report unprecedented high currents (~2 meters per second) at the lakebed on June 18, the same day Enbridge reported the damage to state regulators.

Even with instruments collecting flow data in the Straits under the best conditions, there’s a lot of unstudied space in between them, said Eric Anderson of the NOAA Great Lakes Environmental Research Lab.

“If you were to move [the instruments] to a different area, are you going to see drastically different flow patterns or flow speeds?” he said. “It’s possible ... because of how complex the Straits are.”

There could be water moving through the Straits far faster than scientists have detected. Anderson said the damage incident underlines the need for more and better instruments in the water.

“(It’s) somewhere where the fine details are important,” he said. “And we have to decide whether our observations and models are good enough to meet that.”

According to Timm, when Bechtel realized it had underestimated lakebed erosion, it recommended placing concrete saddles over the lines — but the Lakehead Pipe Line Co, Enbridge’s predecessor, didn’t take the recommendation. In fact it was nearly 50 years before Enbridge started addressing the erosion — the first anchor supports were installed in 2003.

Timm said the company has been in violation of the terms of its easement several times. Everyone from Michigan’s Attorney General to tribal officials to prominent environmental groups agree, and they’re calling for Gov. Gretchen Whitmer to revoke the easement.

“She really needs to step up, protect the Great Lakes and officially revoke this easement because there’s clearly an unknown risk that Enbridge is not taking seriously,” said Beth Wallace of the National Wildlife Federation.

Wallace said NWF and others have been saying this for a while, and thinks Whitmer has been deciding how to proceed.

“The issue is that the governor when she revokes the easement has an uphill battle, a legal battle with Enbridge,” Wallace said. “I think all of that thinking needs to go on pause because we’re in emergency mode.”

In a letter to Gov. Whitmer on Monday, Enbridge CEO Al Monaco said the company understands how important the Great Lakes are to Michigan.

“We further appreciate that we must continually reassure you and the public that our operations of the dual pipelines at the Straits have, first and foremost, the safety of the Great Lakes and the surrounding communities in mind,” wrote Monaco. “That’s the approach we have taken and demonstrated in the past. We have spared no effort or expense in putting safety first and exceeding regulatory requirements, while moving forward expeditiously with the replacement of the Line 5 Straits crossing.”