Skip to main content
You have permission to edit this article.
Edit
1 of 3 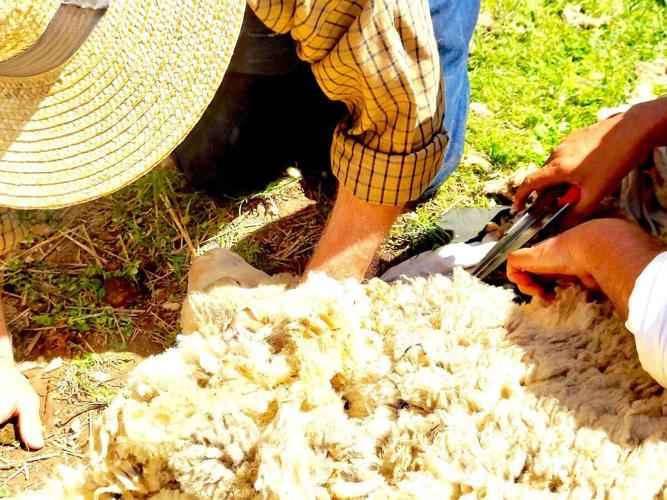 In an event at the Hunter's Home, David Fowler and Maddox Cott demonstrated how to shear a sheep. 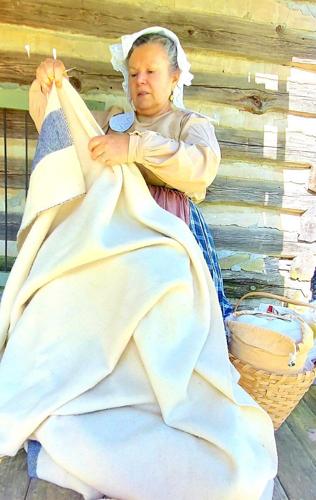 In a Fleece to Fabric demonstration at the Hunter's Home, Kathy Dickson showed how to repair a wool blanket. 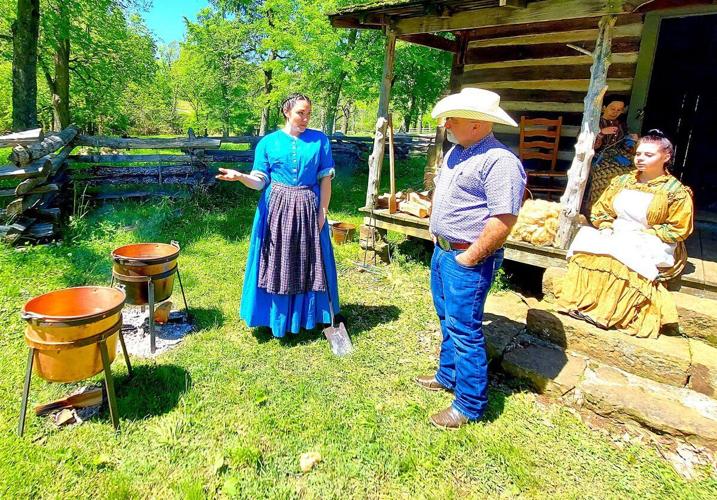 Jennifer Frazee, left, explained the wool-cleaning process to State Sen. Blake Stevens, R-Tahlequah, at a wool event at the Hunter's home, while Kallie McGee sat on the porch.

In an event at the Hunter's Home, David Fowler and Maddox Cott demonstrated how to shear a sheep.

In a Fleece to Fabric demonstration at the Hunter's Home, Kathy Dickson showed how to repair a wool blanket.

Jennifer Frazee, left, explained the wool-cleaning process to State Sen. Blake Stevens, R-Tahlequah, at a wool event at the Hunter's home, while Kallie McGee sat on the porch.

TAHLEQUAH, Oklahoma – A herd of sheep contributed wool to future spinning projects on Saturday, May 7, during the Fleece to Fabric sheep-shearing event at Hunter's Home in Northeastern Oklahoma.

The site is the only remaining antebellum plantation homestead in the state of Oklahoma, and it once operated as an 800-acre plantation. It is commonly known by locals as the Murrell Home, because Minerva Murrell, the niece of Cherokee Chief John Ross, once occupied the mansion.

The current staff of Hunter's Home is working to restore traditions of using 1800s tools, equipment, and practices similar to those employed in the plantation's past as means of bringing history to life. Employees, including living history interpreter Maddox Cott, are dedicated to reviving history.

"I wear period-appropriate clothes and do tasks and skills of the time with tools like the ones they would have used," said Cott. "Part of my job duties as an interpreter is livestock care. With this being a routine part of care for the Merino sheep we have out here, it's crucial that I learn. The opportunity to learn this skill of shearing in a hands-on way only really comes once a year, so I was very excited."

Staff members are turning Hunter's Home back into a functional 19th-century farm, using period tools and techniques to maintain the site in a manner similar to farms and plantations of the 1800s.

Also on staff is Sue Teska, senior interpreter of the site. Teska planned and oversaw Saturday's event, which is centered on preserving the practice of raising and using livestock.

"Since we are building up a flock of heritage breed Merino sheep, this event will most likely become a regular event, since we will need to shear each spring," said Teska. "We have sheared sheep on site before, but this is the first time it has been an event of its own. It has usually been part of another event."

The Merino sheep have historical significance for the property itself, and staff members are working to regenerate the legacy of these animals.

"We will be shearing our own sheep. They are the first Merino sheep to be on this property since before the Civil War, and were the same sheep that George and Minerva Murrell raised when they lived here," said Teska. "The event was an opportunity for the public to see our new lambs, which were the first lambs born on the property since before the Civil War. We have three lambs from three ewes this year."

The sheep, while historically significant to the site, are also personally cared for and individually named.

"For shearing, they were all ewes and are named Ewenice, Brownie and Emily. We also have a ram in our flock named Harvey. The shearing is done by hand, not with electric clippers that are used by shearers today. It is not often you get to see hand shearing," said Teska.

For even longer than sheep have been at Hunter's Home, harvesting and using wool has been a practice from which people and sheep have benefited for millennia.

"Wool has been utilized to make clothing, blankets, and other textiles since around 4,000 BC and is still used today. The processes of wool production are something that not many people today truly understand," said Cott. "This understanding breeds a greater appreciation for a humble but indispensable resource that has been used continuously for much of human history."

Dave Fowler, a regional director of the Oklahoma Historical Society, did the shearing at Saturday's event with the assistance of Cott. While shearing sheep is both a necessity and a practicality, it is one step in a much larger process wherein the product of the sheep, fleece, is harvested, worked, and eventually transformed into consumable goods.

This has been practiced for hundreds of years right there at Hunter's Home. These processes are still integrated into the contemporary American economy, despite the typical distance between the modern consumer and the processes through which products like fabric or wool are generated.

"It is a great way to see what goes into making our clothes today and realize the general process hasn't actually changed. The technology has changed, of course, but wool is still shorn off the sheep; it is still washed, it is still spun, and it is still woven into fabric, just as we will be demonstrating," said Teska.

Jennifer Frazee, director of the Fort Gibson Historical Site, demonstrated the wool process by washing it, or as she said, “making poop soup."

"After the sheep are shorn, we gather up the wool and pick all the larger bits of debris from the fibers. Once that is finished, it is my job to wash the stains, mud, fecal matter, etc. from the picked wool. We do that by adding the wool to lightly soapy water and heating it up," said Frazee. "This can be expanded to be considered a form of art; a continuation of history. People wove their wool into some gorgeous expressions of self, identifiers for families and groups, and put a lot of love into items for their loved ones."

Sorry, there are no recent results for popular articles.

Sorry, there are no recent results for popular images.

Sorry, there are no recent results for popular videos.