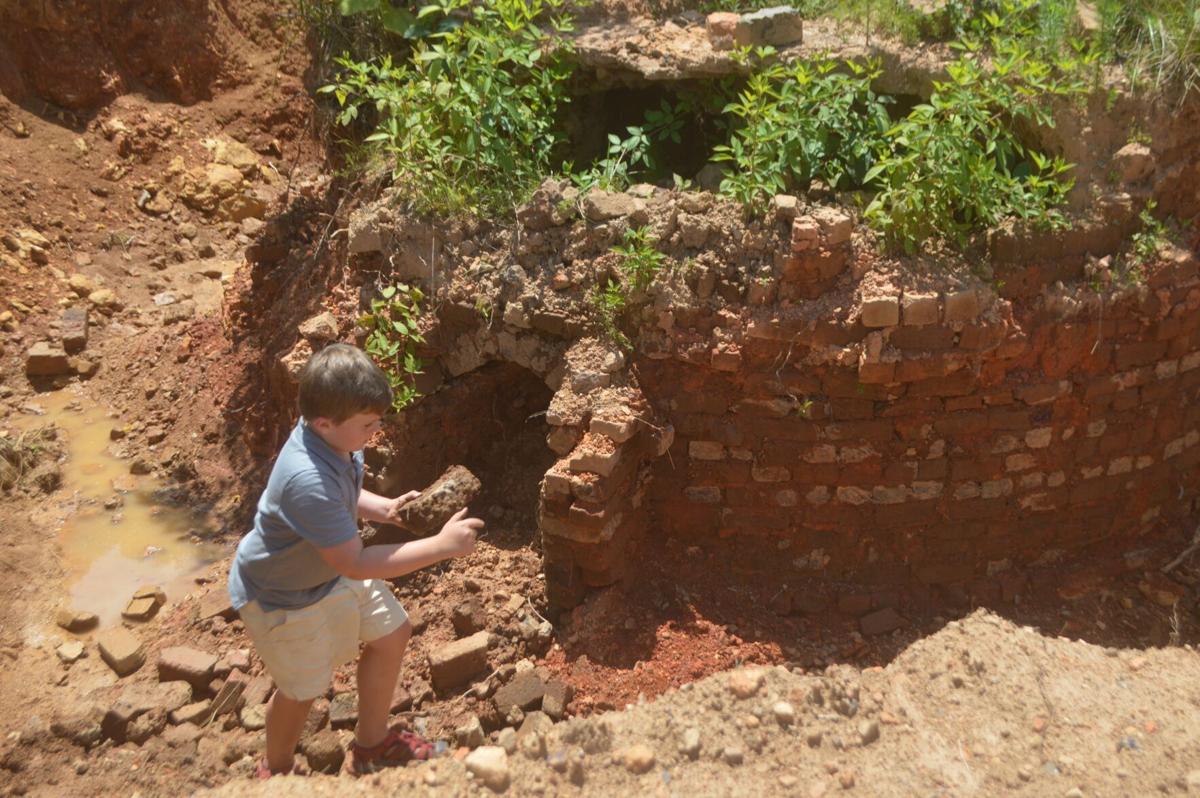 Grayson Adams walks around a 19th century pottery kiln unearthed by his grandfather, Tommy Mitchell, on a property in Limestone County, Alabama. Mitchell, a Limestone County native and owner of Athens Land Surveying Company, started unearthing the kiln about five years ago when he acquired the property. 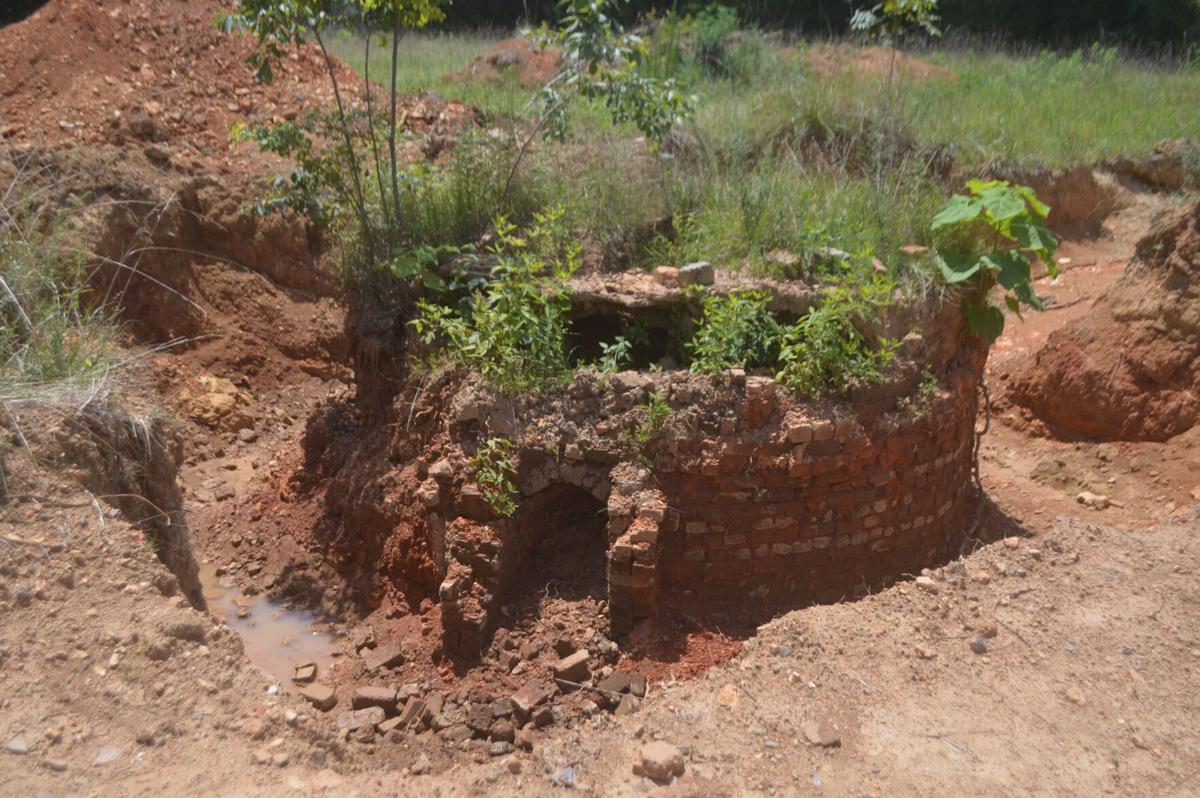 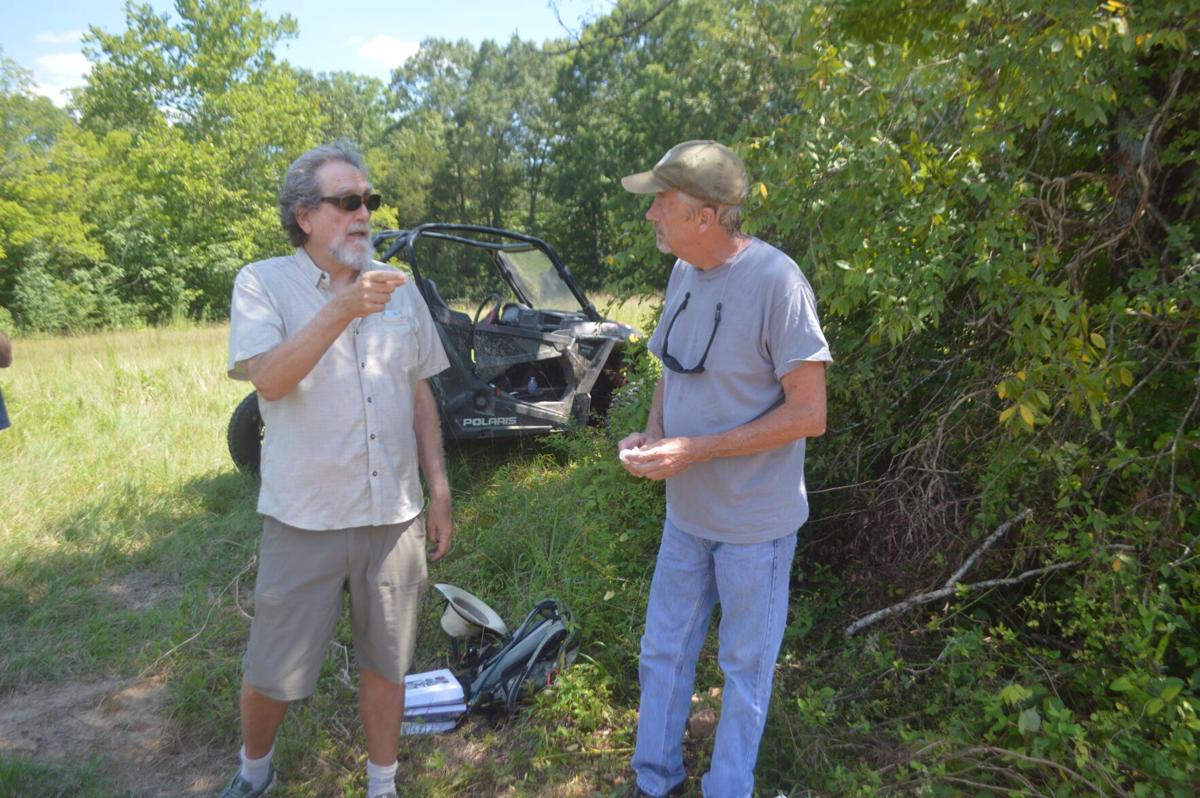 Landowner Tommy Mitchell, right, and Joey Brackner, a folklorist for the Alabama State Council on the Arts, discuss the history of the kiln. 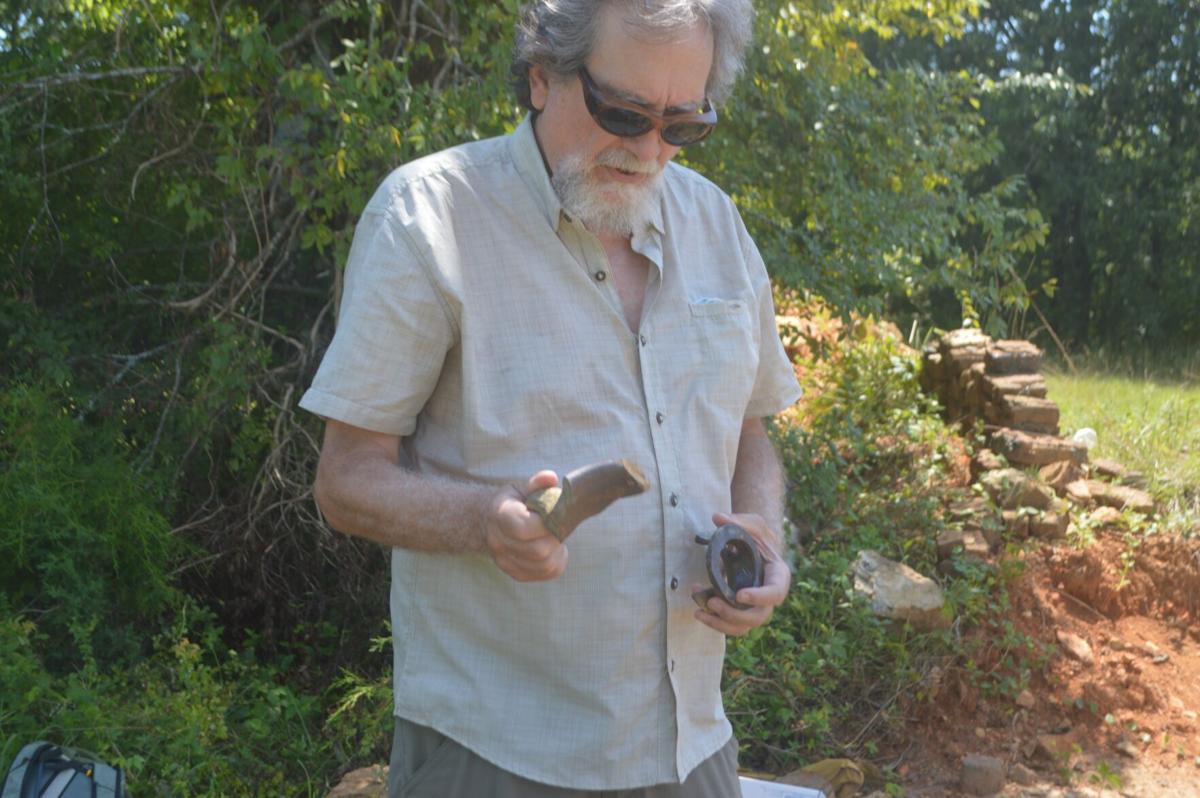 Joey Brackner, a folklorist for the Alabama State Council on the Arts, studies pottery shards and saggers found around an old pottery production site in Limestone County. The site dates back to the 1800s. 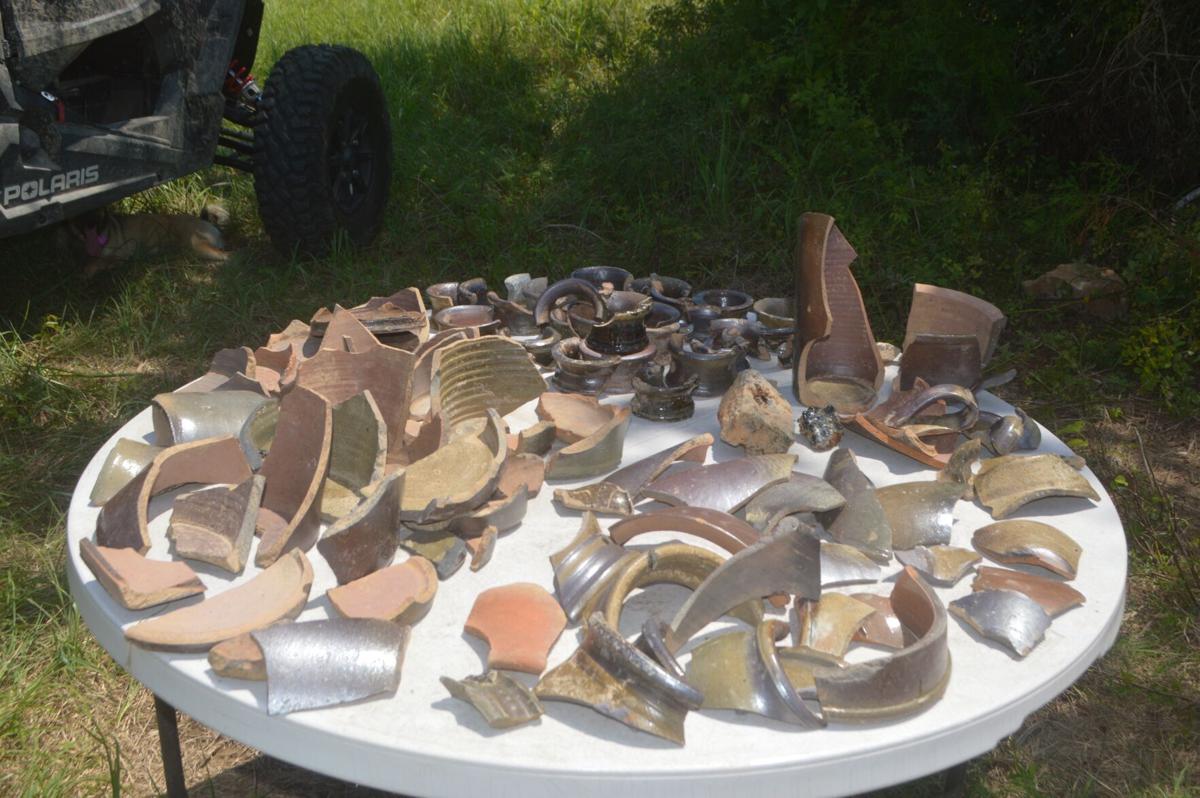 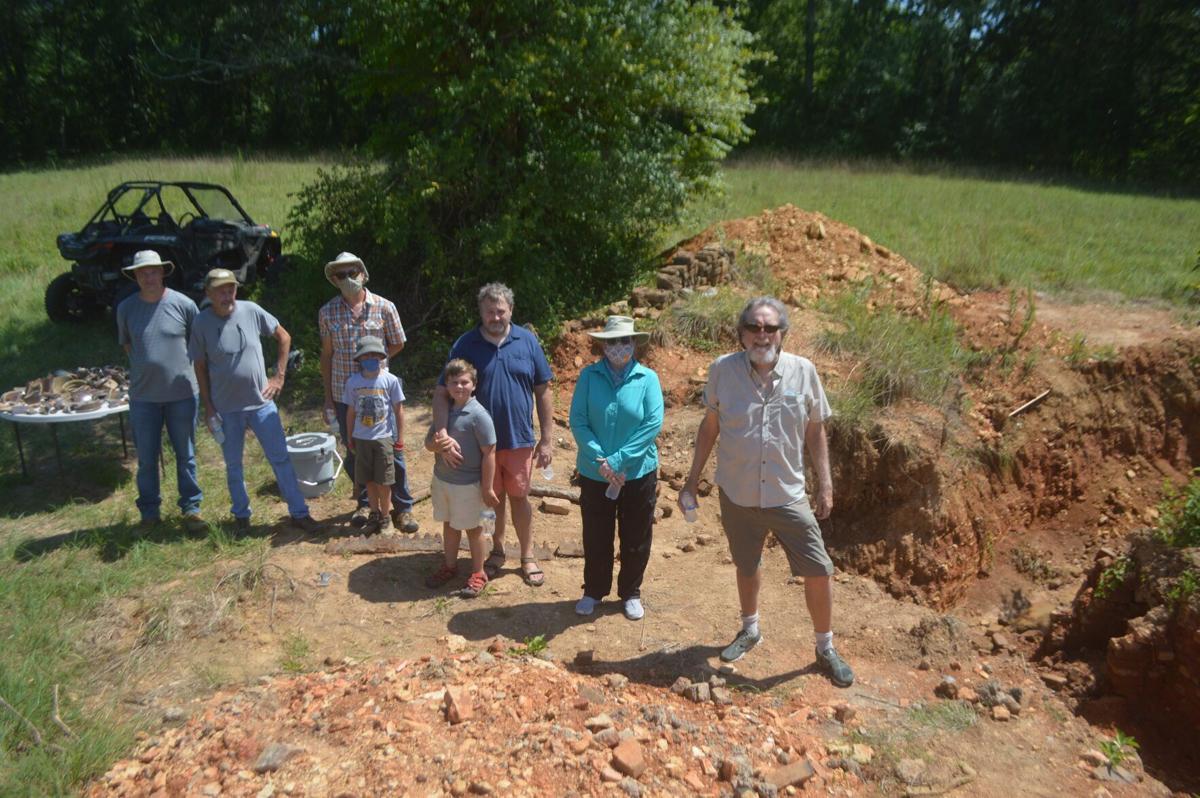 From left, Josh Denmark, Tommy Mitchell, Ben Hoksbergen and son Ty Hoksbergen, Jamie Adams and son Grayson Adams, Stacye Hathorn and Joey Brackner met Thursday on a property in Limestone County, Alabama to examine and possibly record an 1800s above-ground, circular, updraft production kiln discovered by Mitchell. Brackner, a folklorist for the Alabama Council on the Arts, believes the kiln was worked by William Lapington and John W. Black, who were both making pottery before the Civil War. 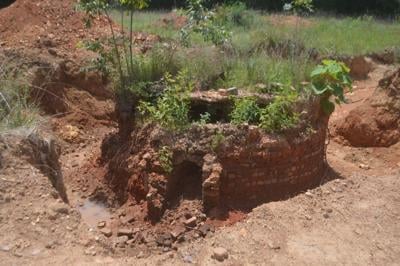 An old pottery kiln unearthed on a piece of property in Limestone County, Alabama could soon have its place in the state's archaeological history books.

Tommy Mitchell, a Limestone native and owner of Athens Land Surveying Company, started unearthing the kiln about five years ago when he acquired the property.

He said that as he worked on the land, he kept finding pieces of old pottery.

“We find little pieces of pottery everywhere,” Mitchell said, “all over this farm.”

Jamie Adams, Mitchell's son, said every time it rains, there are pottery shards all over the place.

Adams said some locals were familiar with a possible kiln and believed it was somewhere in the area.

“Everybody talked about there being a kiln up here,” Mitchell said. “It's been underground for years and years.”

The family poked around for it for several years before they eventually found the kiln in an area used as pastureland. Mitchell said he walked the land with a probing bar and found a little hole in the ground that looked suspicious.

But even after finding the kiln, he let it sit for another five years while he decided how to uncover it. It was only recently that the family used a backhoe to dig around the site.

“We slowly inched into it, to try to let it keep its integrity,” Mitchell said. “Most of it is intact.”

Adams, who happens to be a potter and a professor at Athens State University, did some research and discovered a kiln was in operation in the area from the 1830s through the 1920s.

The kiln has two fire boxes, according to Adams. As the kiln was uncovered, he found many more broken pieces of pottery shards and saggers, or kiln furniture, that were used to protect pottery when it was being fired inside the kiln.

Joey Brackner, a folklorist for the Alabama State Council on the Arts, believes the unearthed kiln is an above-ground, circular, updraft kiln and the kind used by Tennessee potters. The clay used for the pottery was Alabama red clay, most likely dug within sight of the kiln, according to Brackner.

Brackner, who also wrote the book “Alabama Folk Pottery,” visited Limestone County this week to find out more about the site.

“They would have pulled the pottery out through the firebox probably,” Brackner said. “If it was busted, they would have left it right there.”

Brackner said it's definitely an old pottery production site from the 1800s. He said William Lapington, whose great-granddaughter, Rose Lapington, wrote for The News Courier in the 1970s, and John W. Black were potters who worked the kiln. The men were making pottery before the Civil War, according to Brackner. He said Black is listed as the potter in the 1860s and 1870s.

“Limestone County had several historic potteries, this being one of them," he said.

“They used salt glaze, and usually with salt glaze, you have a round kiln like this,” Brackner said.

He explained potters would load the pottery on one side of the kiln before loading a fire on the other side and clamping it up.

“You've got little holes in the top and you close all of them off, but before you do, you dump salt in them,” he said. “The salt makes a sodium vapor and a chemical reaction with the silica, and it forms as a soda glass on the pottery.”

That's why it was impervious to liquids, he said, adding it gave the pottery strength and made it watertight and good for canning. He believes the shards of pottery being found on the site are from after the Civil War. However, he said it's possible there is an earlier pottery kiln and “waster dump” of pottery shards somewhere else on the property.

“They will probably find it eventually,” he said.

Brackner is pleased Mitchell and Adams are sharing the find with others.

“It helps us learn about the people, the artisans who worked in those times,” he said. “They made what people needed to live. If you could not put up food in the 1800s in Alabama, you were in big trouble. It got them through the winter and into the next growing season.”

“You needed stoneware for food, but you also made useful things like tombstones, chamber pots, clay pipes for smoking tobacco,” he said. “They made a wide variety of things. Anything that could be made out of clay, they could do it.”

Ben Hoksbergen, post archaeologist at the U.S. Army's Redstone Arsenal and president of the Huntsville Chapter of the Alabama Archaeological Society, and Stacy Hathorn, state archeologist with the Alabama Historical Commission, were also on site with Brackner this week to see the kiln.

Hoksbergen requested Mitchell register the kiln in a statewide system for historical sites.

“It will be recorded at the University of Alabama, so if archaeologists are researching the distribution of 19th century kiln sites in the Southeast, they can bring up the database and see where it is,” Hoksbergen said.

“This is owned by the landowner, so it's whatever the landowner chooses to do,” Brackner explained. “Obviously, since he's asked people to come in who have background in this kind of material, they're interested in preservation and interested in learning from it. We love that.”

Brackner plans to take some of the information he's gathered and add it to his revised pottery book.

“This is not usual,” he said of the kiln site. “This is wonderful.”

The old kiln is not the only historic treasure found under the Limestone County pastureland. Mitchell has found waterwheel parts used at the old grist mill — Tillman Mill — an old steam engine and a horse-drawn carriage on the property.

“We just hope we can find that whole pot one of these days,” Mitchell said.