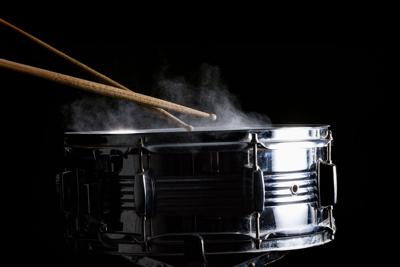 ATHENS, Ala. – Picture it: Friday night at a high school football stadium. It's a classic scene and a staple in most Southern towns.

There's a crowd in the stands, groups wandering around the edge of the field, players lined up alongside and on the field, and cheerleaders getting the fans pumped up.

When it's time to celebrate a score, the band — well, part of it, anyway, depending on how big it is and where the game is located — performs. That is after they pull down their masks, of course — a fight song. At halftime, if they didn't perform pregame,  they'll march onto the field — after the football team is nowhere near it — to perform a show that's mostly them standing still, because they can't move much, if they move at all.

Such is marching season during a COVID-19 pandemic. Much like the rest of 2020, the season has been shaped by uncertainty leading to unprecedented changes that continue to change as the season goes on.

"There's not a lot of guidance out there," said Rusty Bates, director of athletics, safety and transportation for Limestone County schools. "... There's not any official guidance, just a lot of sharing of different ideas that's going into helping us make decisions."

The end result was superintendents and athletic directors across Alabama sharing ideas with one another for how best to keep band a part of football season. In some districts, they didn't, but in Athens and Limestone County, it was kept with a lot of conditions.

"We're actually not moving while playing our wind instruments, but we'll move from drill set to drill set while the percussion are playing, so there won't be as much risk" of spreading the virus, said Athens High band director Ty Parker. "We're also social distancing the drills."

Other bands, like East Limestone, nixed drill formations. They'll march onto the field, play a few songs, then march off. They have the option of doing this pregame or at halftime.

Schools can have a 25-member "pep band" for away games and must keep social distance in the stands. For the larger schools, this meant also have a pep band at home games or moving the band out of the stands.

East band director Jennifer Janzen said they chose to alternate between juniors and seniors for their pep bands. Everyone can perform for the halftime or pregame show at home games, then anyone not in the pep band that week is dismissed. Those that remain must wear a mask when in the stands and when not playing.

Parker said spacing band members out took up too much space in the stands, so they opted to play in the end zone instead. He said it frees up about 100 seats in Athens Stadium, and they're allowing visiting bands to do the same in the opposite end zone.

The Golden Eagle Marching Band won't travel at all for the start of the season, but it could be a possibility for later.

Uniforms are also out. For many schools, the rule was to only wear them if they could be dry-cleaned after each use. To avoid the cost and the risk of damaging expensive uniforms that often have to last through numerous seasons and students before they are replaced, it was generally decided to wear T-shirts and khakis or jeans instead.

It's not just the games being affected, either. Practices have been difficult. The pandemic led to at least one band camp being canceled entirely, and band directors in the county were restricted from practicing as a whole band or even indoors due to social distancing and the amount of air being expelled during play.

Bates said it was one of the few rules issued from the Alabama State Department of Education. The state limited indoor play for all instruments, including elementary students learning the recorder.

"We're fortunate to have really large bands in the county, which is great, but when you start trying to socially distance 200–300 people ... it creates a problem for us," he said.

Athens High was fortunate to have a large performing arts center and auditorium included in the plans for their new building. Parker said they've been able to use them to hold practice indoors.

If all that sounds like more trouble than it's worth, just remember — these are band kids. They're used to weeks of band camp with heat indexes above 100 degrees, marching in multilayered uniforms that are too thick in summer and too thin in winter, and doing all of it with a group of teenagers just like them — committed to the craft, come heck or pandemic.

"The kids, honestly, have been troopers," Parker said. "They have great attitudes. We have had the same fun and excitement at band camp, with rookie awards and dress-up days."

He said they understand the restrictions are for their safety, and they're still having a lot of fun with the show.

Amanda Barnes, whose son Noah is the drum major at West Limestone High this year, said her son has helped keep her in check whenever she gets frustrated about the season.

"I'll tell you exactly what he said. He said, 'I want to be able to stand in front of my entire band and present a show to our school. They're not allowing me to do that, but I'll take the 25 I can get. Better the 25 than none at all.'"

She said her son, a junior this year, was looking forward to helping choreograph the show and designing a drum major uniform for himself. The pandemic changed those plans, but she said he'll still be one of the few at every game and she intends to be there supporting him.

"I feel like they're being discriminated against, but as Noah pointed out, we'll take what we can get."

Barnes said despite her frustration, it's unlikely to affect her son's band experience this year or in the long run. If anything, she's more concerned about what happens after marching season.

"A lot of people don't understand marching band is only one part of what we do," Barnes said. "It's the big part, the part everyone knows, it's the show. But the concert band is just as important."

She wonders how the rule against indoor practicing will fare as the temperature drops and winter nears. Will there be Christmas or spring concerts? Will families be able to attend? When schools shut down in March, many students were suddenly left without access to their instruments for weeks — will that happen again this year?

Unfortunately, the answers aren't there right now. School districts are following state guidance and learning from other districts, but things change regularly. Bates said ALSDE or the Alabama High School Athletics Association generally usually issues changes within a day of the governor amending or announcing an order.

"I knew going into the show, if we had a show, it would have to be modified and tried to make the best decision," Parker said. "I picked out really entertaining music that the crowd would enjoy and the kids would enjoy playing. ... I knew it would be altered drastically due to COVID-19."

Because while there's a lot unknown and the rules seem to change frequently, what is known is their dedication to keeping band as safe as possible for those involved.

"If the students come down with COVID, I don't want it to be from participating in band," Parker said.

"We will do what needs to be done to keep kids safe," Jenzen said.

Jessica Barnett is a reporter for the News Courier in Athens, Alabama.