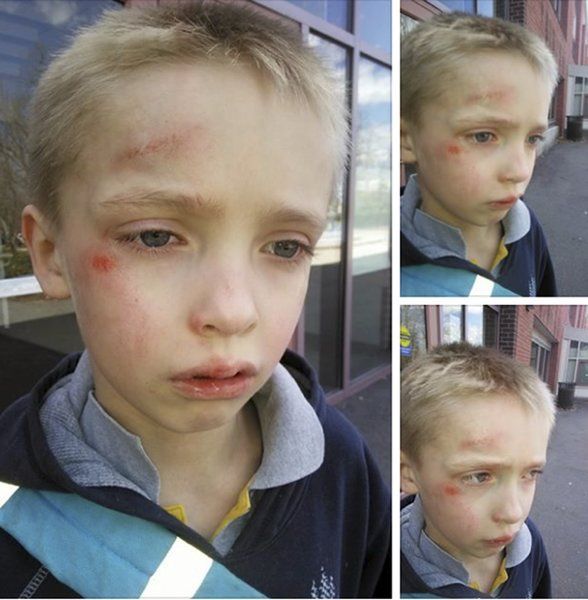 Charlie Nesbitt of Methuen, Mass. posted these pictures of his son on Facebook claiming he has been bullied at school. 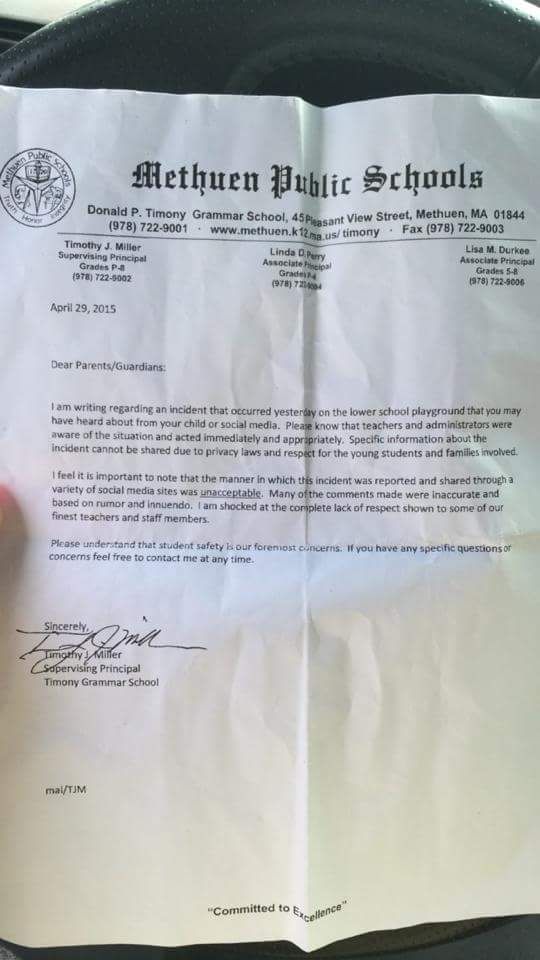 Charlie Nesbitt of Methuen, Mass. posted these pictures of his son on Facebook claiming he has been bullied at school.

METHUEN, Mass — The photos of his 8-year-old son Kyle's scraped face that Charlie Nesbitt recently posted on Facebook has sparked a social media firestorm. Officials in a Massachusetts school district have fielded scores of angry phone calls from sympathetic parents around the country and even the world outraged by Nesbitt's claims that school officials ignored his complaints about bullying.

But school officials have questioned Nesbitt's decision to take his complaints to social media, with one calling it "unacceptable."

Nesbitt posted the pictures on his Facebook page at 1:15 p.m. Tuesday, and a short time later set up a campaign on online fundraising site GoFundMe, complete with another picture of his bruised son, to ask the public for $20,000 for legal fees, financial support while Nesbitt is out of work, and private school tuition for his three sons.

Nesbitt, who claims that he was also a victim of bullying in elementary school, said on his Facebook page that he had complained to school officials at Timony Grammar School for weeks before an incident on the playground Tuesday. He picked his son up from school in the middle of the day with scrapes and a bruise on his face and a fat lip, saying the boy "got jumped" by his bully.

People shared and tweeted the three images Nesbitt posted online more than 1,000 times Tuesday and Wednesday. His initial Facebook posts contained profanity about the school system, warned that the schools were "about to meet the old me," and linked directly to his online fundraising site.

"This is not to profit from our child's pain but to raise money for attorneys fees, relocating, and possibly a private Christian school for my boys," Nesbitt wrote in a Facebook post linking to the GoFundMe page. "What happened to my family is a tragedy. I am currently not working until I can figure out where to go and where my kids will attend school. I am already incurring huge expenses as well as suffering major expenditures. This was unexpected. I'm not too proud to ask for help when I really need it."

The police officer assigned to Timony was not aware of prior bullying issues, Methuen Police Chief Joseph Solomon said Wednesday.

Superintendent Judith Scannell could not comment specifically on the incident or on the boy, citing confidentiality, but said the school system is committed to preventing bullying.

"In addition to its dedication to maintaining school environments free from bullying, harassment and teasing, the district is also committed to ensuring the privacy rights of students under federal and state laws and regulations," she said in a written statement Wednesday. "Accordingly, the district is unable to respond to inquiries from third parties or organizations regarding issues or complaints involving a specific student except with the informed written consent of that student’s parent or guardian. Upon receipt of a parent’s or guardian’s specific written authorization, however, the district is happy to make public information regarding the district’s efforts and response to complaints or concerns made to the district by the parent/guardian or the specific student."

Scannell said in an interview Wednesday that her office took calls from media outlets in Boston, New York, and other parts of the country, and even from parents in Australia, New Zealand and the United Kingdom who have seen the pictures.

"They're very aggressive calls that are coming in," Scannell said. "What's so sad about it, they have no information whatsoever to back up the disrespectful things they’re saying on the phone. It's very difficult. We have to abide by the law."

"I feel it is important to note that the manner in which this incident was reported and shared through a variety of social media sites was unacceptable," he wrote. "Many of the comments made were inaccurate and based on rumor and innuendo. I am shocked at the complete lack of respect shown to some of our finest teachers and staff members."

After receiving a photo of it from another parent, Nesbitt posted a photo of Miller's letter to his Facebook page.

"Unacceptable? I think the phone call from Mr. Miller asking me to take down the post was unacceptable," Nesbit wrote in response. "He didn't ask how my son was doing. Time to put the blame of unacceptable behavior firmly where it belongs!"