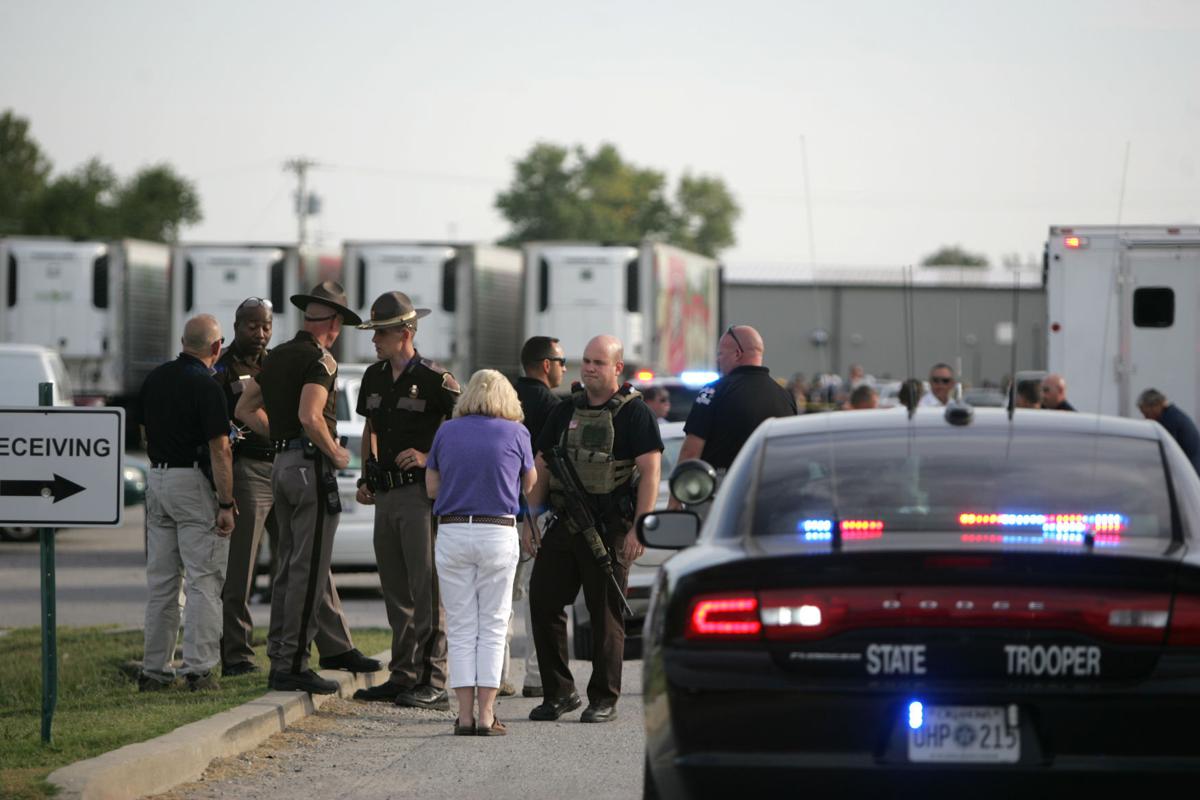 A tactical officer talks with a woman seeking information in the parking lot of Vaughan Foods in Moore, Okla. after a man attacked two women, killing one on Thursday, Sept. 25, 2014. 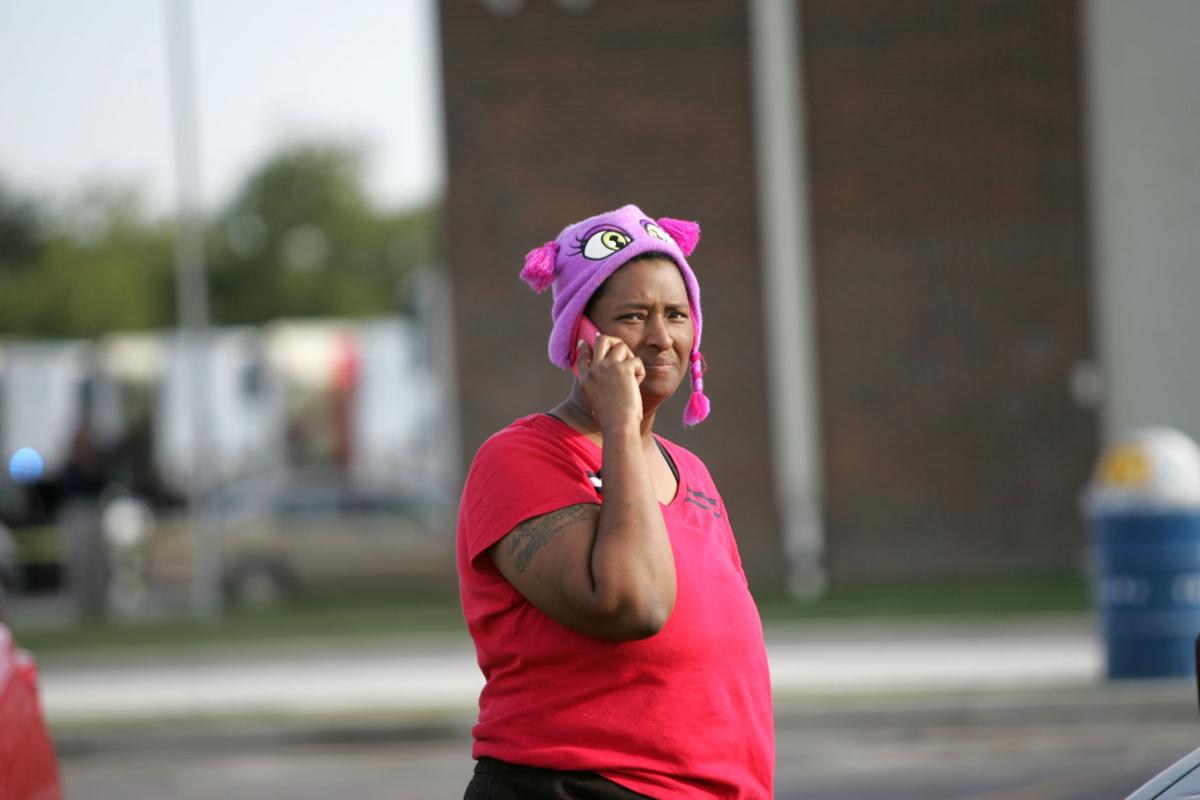 An employee of Vaughan Foods in Moore, Okla. talks with loved ones outside the plant after a man attacked two women, killing one, before being shot by the company's chief operating officer on Thursday, Sept. 25, 2014.

A tactical officer talks with a woman seeking information in the parking lot of Vaughan Foods in Moore, Okla. after a man attacked two women, killing one on Thursday, Sept. 25, 2014.

An employee of Vaughan Foods in Moore, Okla. talks with loved ones outside the plant after a man attacked two women, killing one, before being shot by the company's chief operating officer on Thursday, Sept. 25, 2014.

MOORE, Okla. – The FBI joined local authorities Friday in investigating the background of an Islamic worker accused of beheading one employee and seriously injuring another at a food processing plant in this Oklahoma City suburb.

Police said Alton Nolen, 30, a vegetable cutter at Vaughan Foods Inc. of Moore, used a 10-inch work knife to kill and wound the front office employees at 4:10 p.m. Thursday.  He had just been fired.

The company’s chief operating officer, Mark Vaughan, stopped the brutal attack by shooting Nolen with a rifle he kept in his office. Police lauded Vaughan, a reserve deputy sheriff, as a hero who prevented further mayhem.

“There is every reason to believe that the lives of untold others were saved,” said Oklahoma County Sheriff John Whetsel.

Beheaded in the attack was Colleen Hufford, 54. Police said she encountered Nolen as he walked into the company’s front office minutes after being fired in another part of the sprawling food processing and distribution plant.

Traci Johnson, 43, who also worked in the front office, was stabbed multiple times before her attacker was shot. She was taken in serious condition to a nearby hospital.

Nolen survived two bullets fired into his body, authorities said. He was also taken to the hospital for surgery. Authorities said he would be formally charged as soon as his medical condition permitted.

Moore Police Sgt. Jeremy Lewis said Nolen was a converted Muslim who had been seeking to solicit his fellow workers at Vaughan Foods to his Islamic faith. He said because of that aspect of the case, the FBI was asked to assist with the investigation.

The tragedy occurred at a time when public safety tensions are heightened across the country by terrorists in the Middle East publicly beheading Western journalists and aid workers in retaliation for their countries opposing the radical Islamic State group.

More than 500 people work at the Vaughan Foods plant. Police said more than 300 were on duty at the time of the attack.

FBI officials in Oklahoma City cautioned against conclusions that might tie the tragedy to terrorist activity or a larger threat.

“There is no information currently in our possession to indicate there is any additional threat to the citizens of Oklahoma related to this incident,” the Oklahoma City FBI office said in a statement.

Sgt. Lewis said early reports indicated the attack was set off Nolen’s firing. But he did not know why Nolen was fired.

But, he added, the coworkers he attacked were unsuspecting.

"It did appear random. He wasn't targeting anyone," Lewis said. "He wasn’t going specifically after them. They were just in his way as he came in."

On Thursday afternoon, Nolen left the human resources department at Vaughan Foods, went to the company’s parking lot and drove to the front of the food plant, where he crashed into another vehicle, police said. He walked through the unsecured main doors of the facility.

COO Vaughan said another employee alerted him to the attack on the two female workers in the front office.

“Mark put an end to the threat by shooting the suspect and saving the life of a second victim who was being actively attacked by the suspect,” said Sheriff Whetsel.

Vaughan is the former owner of Vaughan Foods, having sold it to Oregon-based Reser’s Fine Foods Inc. in 2011. He stayed on as COO after the sale. He has been a reserve deputy with the sheriff’s office for four years, and is a highly trained member of its fast reaction tactical team, said the sheriff.

Nolen has an extensive criminal past, which includes incarceration for marijuana possession, escaping detention, assault and battery of a police officer, and possession of a controlled substance with intent to distribute cocaine.

Department of Corrections records show note he has a chest tattoo reading, “As-Salaamu Ataikum,” a misspelling of an Arabic phrase that translates to “Peace be upon you.” He also has tattoos of Jesus, an image of praying hands, and the words “RIP Lil Kris, Judah."

Adam Soltani, executive director of the Council on American-Islamic Relation in Oklahoma, said he didn’t know where Nolen had learned about Islam or if he was a member of an Oklahoma mosque.

It’s unclear how long ago Nolen converted, though officials and co-workers described it as recently.

“I’m literally sick to my stomach hearing this news,” Hooper said. “There would be no excuse or justification of any kind for this.”

Soltani said about 40,000 Muslims live in Oklahoma, and the community is “heartbroken.”

“Our faith condemns such acts,” he said. “There’s nothing in our faith that supports the taking of innocent life. It’s definitely not something he got from the faith teachings.”

He also said while members try to share their faith, “aggressively” trying to convert another goes against Islam’s teachings.

Soltani said Oklahoma Muslims are being vigilant in case those anti-Muslim sentiments decide to retaliate.

“Of course we’re concerned,” he said. “Our communities are on alert to take more safety precautions.”

Vaughan Foods issued a statement saying it was "shocked and deeply saddened."

"Our thoughts and prayers go out to the families and friends of the team member we lost and all those affected," said spokeswoman Danielle Katcher.

According to Sgt. Jeremy Lewis of the Moore Police Department, Alton Nolen walked into Vaughan Foods Inc. on Thursday afternoon and attacked t…