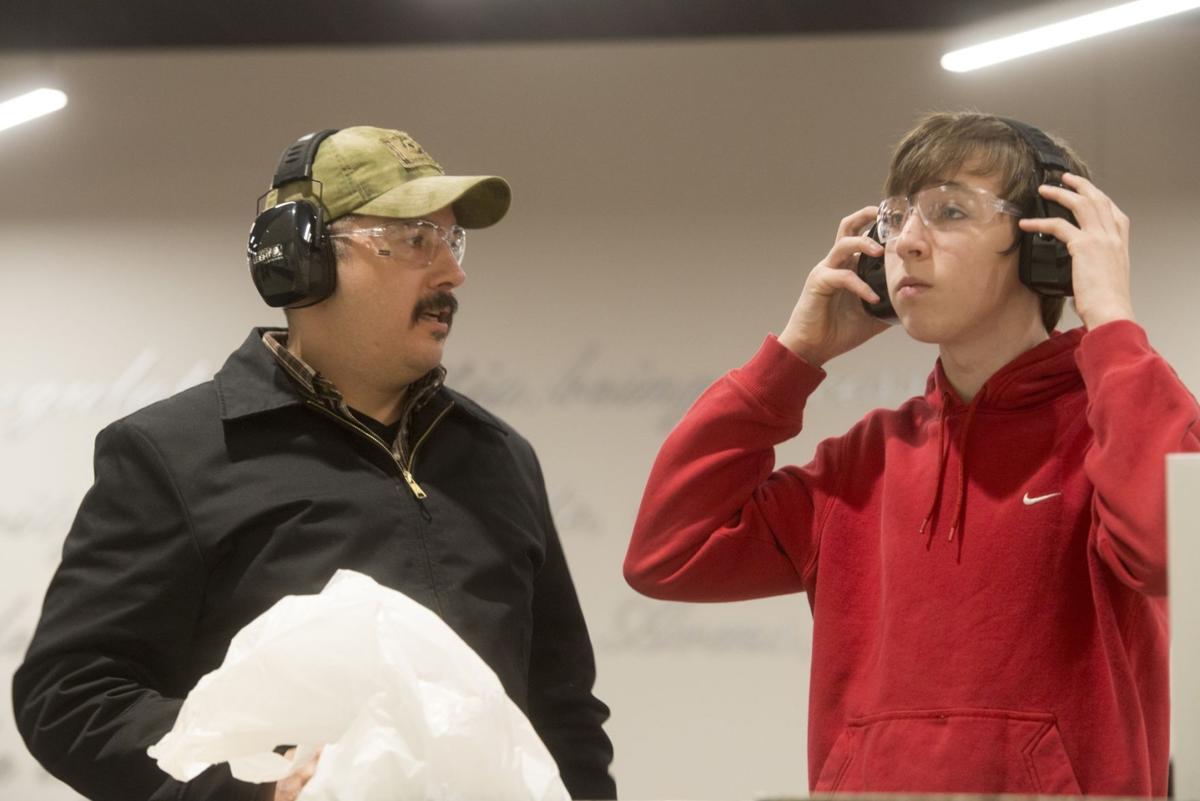 Joaquin Legorreta and his son, Elijah Legorreta, 14, put on their safety goggles and ear protection before they take turns firing at targets at Elite Shooting Sports in Manassas, Virginia. 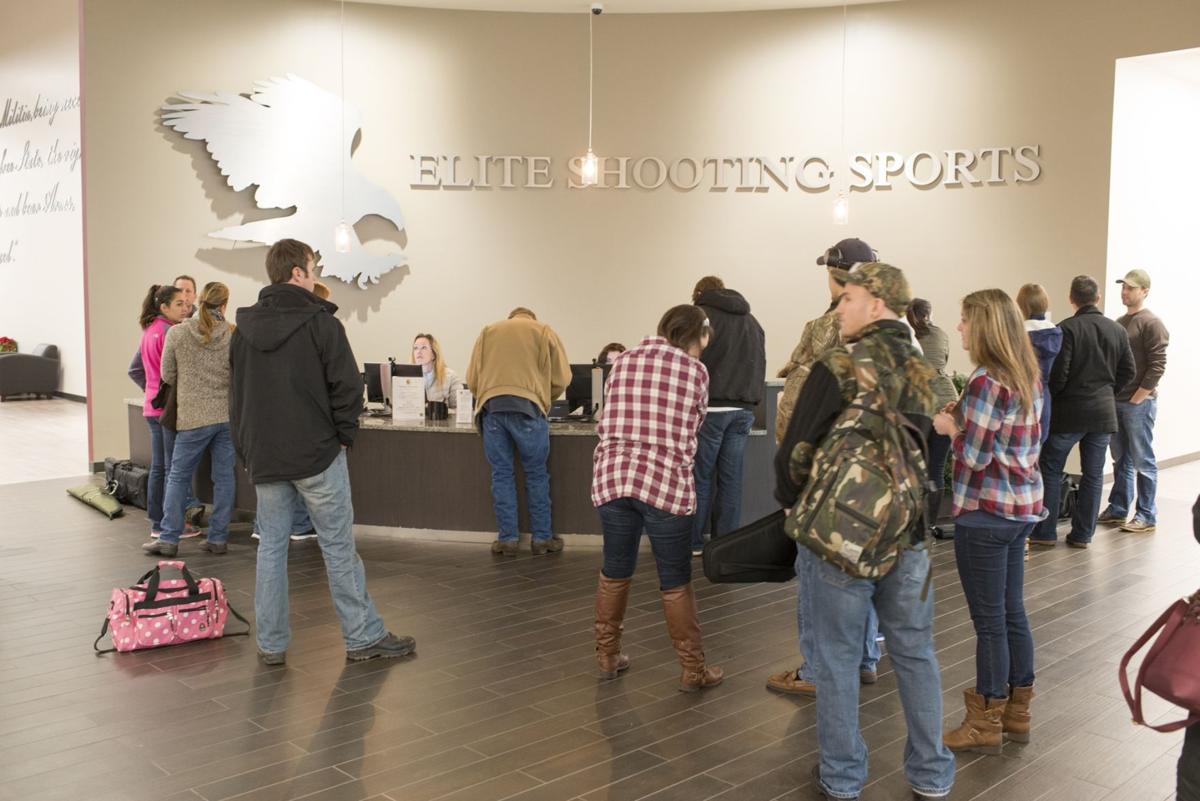 Customers line up to spend a morning on the shooting ranges at Elite Shooting Sports in Manassas, Virginia.

Joaquin Legorreta and his son, Elijah Legorreta, 14, put on their safety goggles and ear protection before they take turns firing at targets at Elite Shooting Sports in Manassas, Virginia.

Customers line up to spend a morning on the shooting ranges at Elite Shooting Sports in Manassas, Virginia.

Blake Vaught and Alex Williamson, buddies in their late 20s, were having a cognitive dissonance moment.

"This place is like a country club," Vaught said, looking at a concierge desk, granite countertops and sleek black couches.

They were not at a country club. They were not at a steakhouse. They were at Elite Shooting Sports, a new gun range in Manassas, Virginia, that, like a wave of other new ranges around the country, is targeting a new breed of shooter — younger, more affluent, style-focused, increasingly female and even environmentally conscious.

The gun industry's term for these shooting retreats: Guntry Clubs.

The high-end ranges come as the $15 billion gun industry's sales have more than doubled since 2005. Fears of regulations with a Democrat in the Oval Office have juiced much of that growth, which is now leveling out. But experts also say an industry shift away from hunting culture has helped spawn a new generation of firearms enthusiasts buying up sleekly designed handguns and AR-15 rifles for tactical shooting practice.

The average age of new target shooters is 33, while 47 percent live in urban or suburban areas, and 37 percent are female, according to the National Shooting Sports Foundation, a trade association for the firearms industry. Shooters spend $10 billion a year on target shooting, including the cost of firearms, ammunition and range fees.

Those demographics and economics are attracting investors without firearms industry backgrounds, who see ranges as a new place to employ their cash. Elite Shooting Sports, a nearly $14 million project, has investors from the electronics industry. Real estate, finance, hotel and auto industry executives have backed other new ranges.

"A lot of savvy investors have seen the surge in sales within the firearms industry, see that it's a quality industry to invest in and are smartly doing so," said Zach Snow, a range expert at the sports foundation. "These ranges are trying to project a comfortable image to the largest contingent of people possible."

Gone are the folding chairs, stale coffee and drab settings of some old mom-and-pop gun ranges. The idea now is to compete for entertainment dollars with golf and country clubs, nightclubs and movie theaters, which have also gone high-end with leather chairs and mixed drinks. Miami's Lock & Load, which offers themed machine gun packages, including one with Israeli special forces weapons, is the No. 1 ranked activity in the city on TripAdvisor. Ranges are even becoming a new place to take clients for lunch — and squeeze off a few rounds.

Standing in the lobby of Elite Shooting Sports, near the concierge desk where shooters check in and sign forms on iPads, Greg Wodack, the range's founder and managing partner, said: "We wanted to be more open and inviting for families, to appeal to everyone. This is not your stereotypical range. "

Wodack, a former professional shooter, used to run the National Rifle Association's shooting range and consult on other ranges around the country. Seeing where the business was going, he went off on his own but differentiated by putting a more utilitarian spin on the trend — creating a shooter's version of affordable luxury. Membership fees are just $34.95 a month; hourly rates start at $20.

The range is colossal — more than 65,000 square feet, with 42 shooting lanes featuring booths wider than industry standards. A local millworker made the counters and dark wooden sales kiosks. Shooting booth tables have oak frames. In the 100-yard range, shooters can monitor where their rounds hit on an overhead screen.

There is a cafe serving pastries. Local restaurants cater lunches. There are enormous flat-screen TVs in the mammoth lounge area. And then there is the air. It is always a crisp 71 degrees. A special filtering system pushes gun smoke away from the shooter, cleaning the air so expertly that Wodack said it leaves the building cleaner than it came in.

Since opening in November, the club is averaging a thousand new customers a week.

"This is absolutely beautiful," said Cheryl Serrano, 39, who lives in Bristow, Virginia. "It's amazing."

Wearing a hot pink vest, Serrano stopped in this month with her family — her husband and sons, decked out head-to-toe in Under Armour gear, and her sister visiting from California. Serrano was there to shoot her Christmas present and a couple other guns. She had previously shot at an outdoor gun club where her father was a member.

"This is nice, and now we can establish ourselves here," she said.

They all took turns shooting. Serrano and her sister commemorated the moment with a selfie.

Owners of older local gun ranges said they aren't concerned about Elite Shooting Sports or other high-end ranges, but they do grumble a bit about them in class-like tones.

"It's for the people who have money that the rest of us don't have," said Carl Roy, the president of the Maryland Small Arms Range in Upper Marlboro, Maryland. "Is it bad? Is a country club bad for golf? You might not be able to afford to golf there, but it doesn't hurt the game."

Wodack and other high-end gun range owners think their efforts are good for the industry, attracting people who might be hesitant to try shooting at an old-school club, fearing they'll use the wrong lingo or be privately mocked because they're a newbie. Everyone who comes to Elite Shooting Sports — expert or novice — has to watch an orientation video about range etiquette and rules. Wodack preaches exceptional customer service to his staff.

In Houston, the Athena Gun Club — its amenities page on its website has a picture of a Starbucks-like takeout cup surrounded by coffee beans — promotes a surround-sound simulator for "first time shooters apprehensive of handling a live firearm." In its retail store, firearms are displayed not in glass cases but on tables like iPhones at an Apple Store. (The guns are disabled.)

"We wanted to build a business so people right off the bat would feel comfortable and not like they are doing something wrong," said Steve Bishop, Athena's marketing manager. "None of us started as an expert shooter."

Shooters won't find much political talk at these new ranges, either.

"We are not going to push super pro-gun ideologies in people's faces," said Javier Lopez, a partner at Miami's Lock & Load. "We avoid that stuff at all costs. Our staff will not initiate any political discussions with any of our guests."

Which is not to say that these ranges are trying to avoid old-school shooters. Not at all. But, as Wodack put it, "with the Tactical Teddy group, if you go too far off in that direction, you're not appealing to everyone."

There has been debate about the new ranges in online forums.

In a discussion of Guntry Clubs on a Glock forum last year, a commenter wrote, "I couldn't help but feel something amiss whenever you go to a boutique, fancy gun store versus a hole-in-the-wall store." But the thought of being able to "smoke a nice cigar after some blasting does sound deliciously inviting."

Already, shooters who used to shoot at the NRA range and other old-school ranges are showing up at Elite Shooting Sports.

"So far, I love it," said John Lehman, 48, who was getting ready to shoot for the first time at the new range. "This is state of the art. This is awesome."