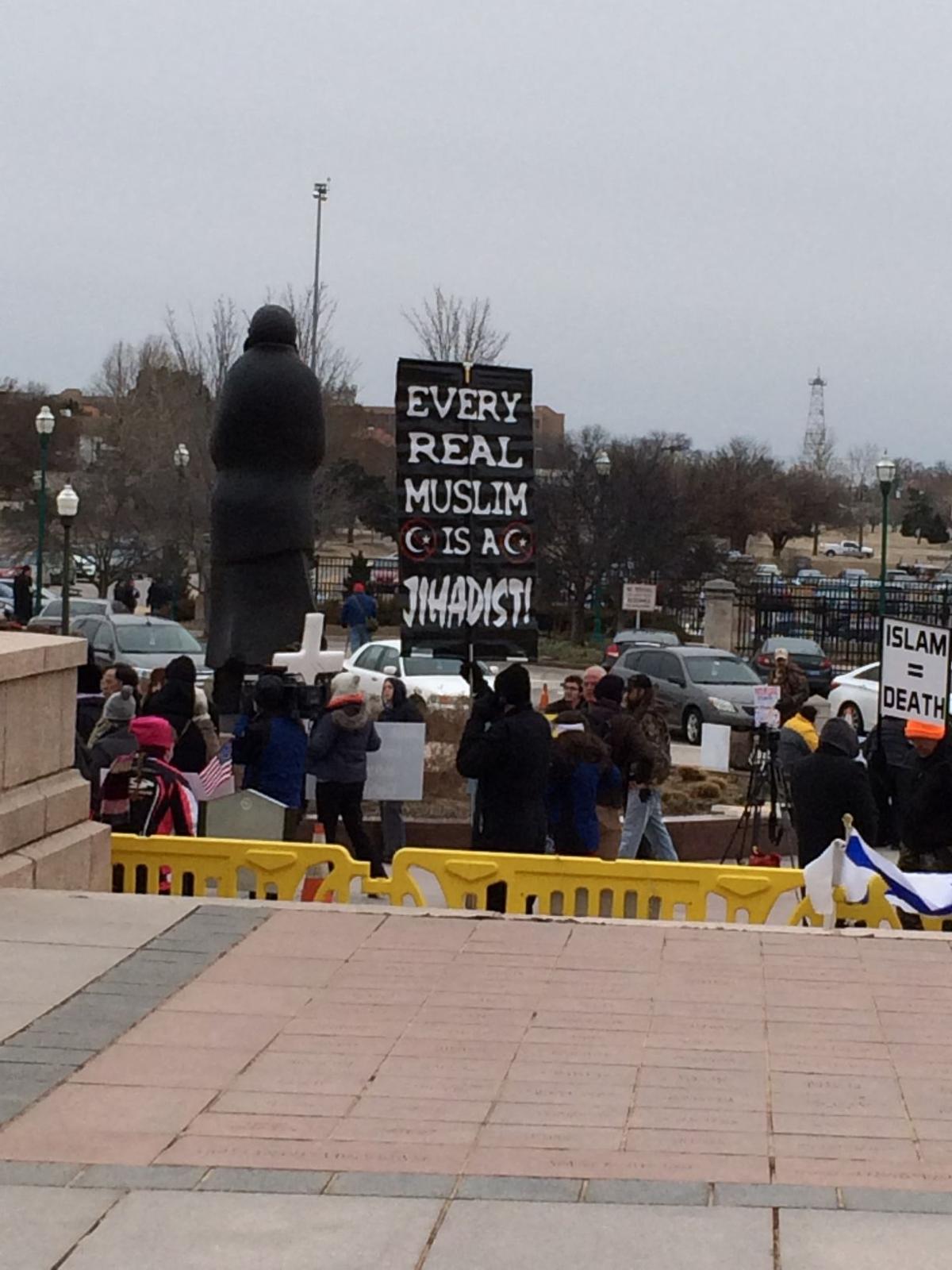 Protesters gathered outside the State Capitol, where more than 100 Oklahoma Muslims held the first-ever Muslim Day to promote civic engagement and understanding of their beliefs. 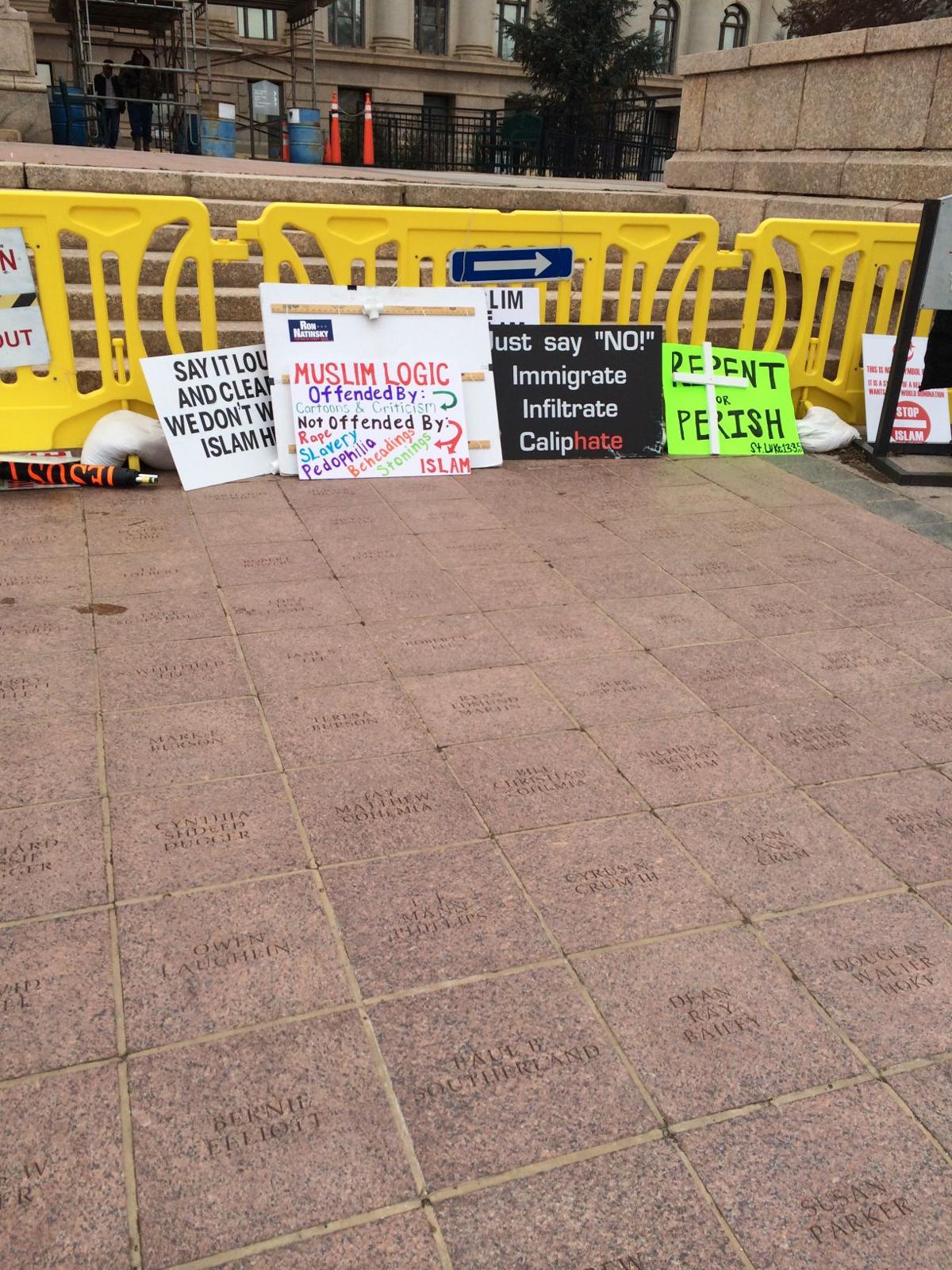 Protesters left signs outside the Capitol's entrance, where they'd shouted at more than 100 people arriving for Muslim Day on Friday morning.

Protesters gathered outside the State Capitol, where more than 100 Oklahoma Muslims held the first-ever Muslim Day to promote civic engagement and understanding of their beliefs.

Protesters left signs outside the Capitol's entrance, where they'd shouted at more than 100 people arriving for Muslim Day on Friday morning.

OKLAHOMA CITY — Several dozen protesters, many carrying signs proclaiming their distaste for Islam, stood in the bitter cold Friday to protest the first-ever Muslim Day event at the State Capitol.

Protesters shouted as more than 100 Muslims entered the building amid a heightened police presence.

The demonstrations were mostly verbal, but a group of high school students reported being spit upon as they passed through the gauntlet in front of the main visitor entrance to take part in an event meant to encourage civic engagement. While no arrests were made, troopers removed a woman from the building when she became disruptive and tried to interrupt an afternoon Muslim prayer session by reciting the "Lord's Prayer."

Few lawmakers attended Muslim Day, as it was held on a day when the Legislature was out of session.

Adam Soltani, executive director of the Council on American-Islamic Relations' Oklahoma chapter, which organized the event, said Muslims plan to return next week to hand out copies of Quran, the Islamic holy book, to lawmakers. He said he hopes it serves as a “educational resource” to teach what Muslims really believe.

Initial concerns about whether Muslims could safely enter the Capitol were allayed Friday morning when more than 70 interfaith leaders showed up to help escort attendees into the building, Soltani said.

He noted the protests appear to be part of a pattern at Islamic events across the country.

“So, unfortunately, I’m not surprised," he said. "I wish they’d be open to dialogue and trying to understand our faith more rather than repeating hateful messages and living in their ignorance.”

Protesters, however, contend that it's American Muslims who live in ignorance.

“Your ignorance will cause your death,” a woman shouted outside the Capitol, eliciting a number “Amens” in response.

By mid-morning, as temperatures dipped into the teens, the number of protesters dwindled significantly.

Doug McDougal, of Quinlan, Texas, carrying a large Israeli flag and a flag bearing a Christian symbol, said he drove five hours to stand up and help save his country.

“Islam is not here to co-exist,” he said. “Islam his here to dominate.”

He noted that people drove from as far as Houston, Kansas and Arkansas to protest.

“Where are all the Oklahomans?” he asked. “Where are they?”

“Not enough of us here,” a man answered.

Julie Wilkinson, of Holdenville, said she got negative reaction from friends on Facebook when she made it known that she planned to protest. People told her that she didn’t believe in personal freedoms.

Wilkinson bore a sign showing the Islamic symbol of crescent moon and star. It read, “This is not a symbol of peace.”

Wilkinson said Muslims have a right to meet with the lawmakers, but she believes the Council on American-Islamic Relations supports terrorism.

“I think they need to make a more public presence about the terrible things done in the name of their religion,” she said. “… There’s so much silence, and I think it’s because most Muslims are fearful of being targeted by radicals of their own."