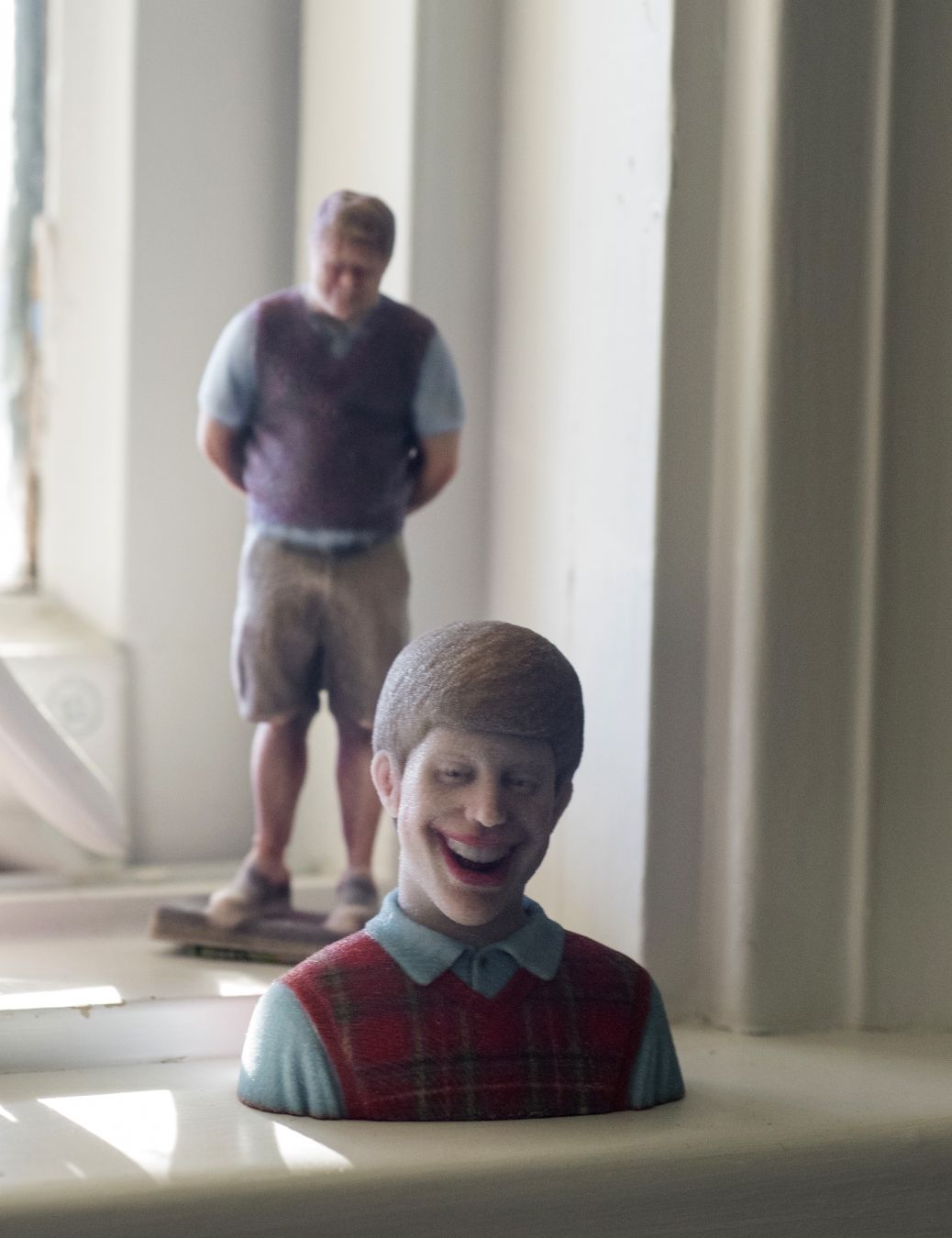 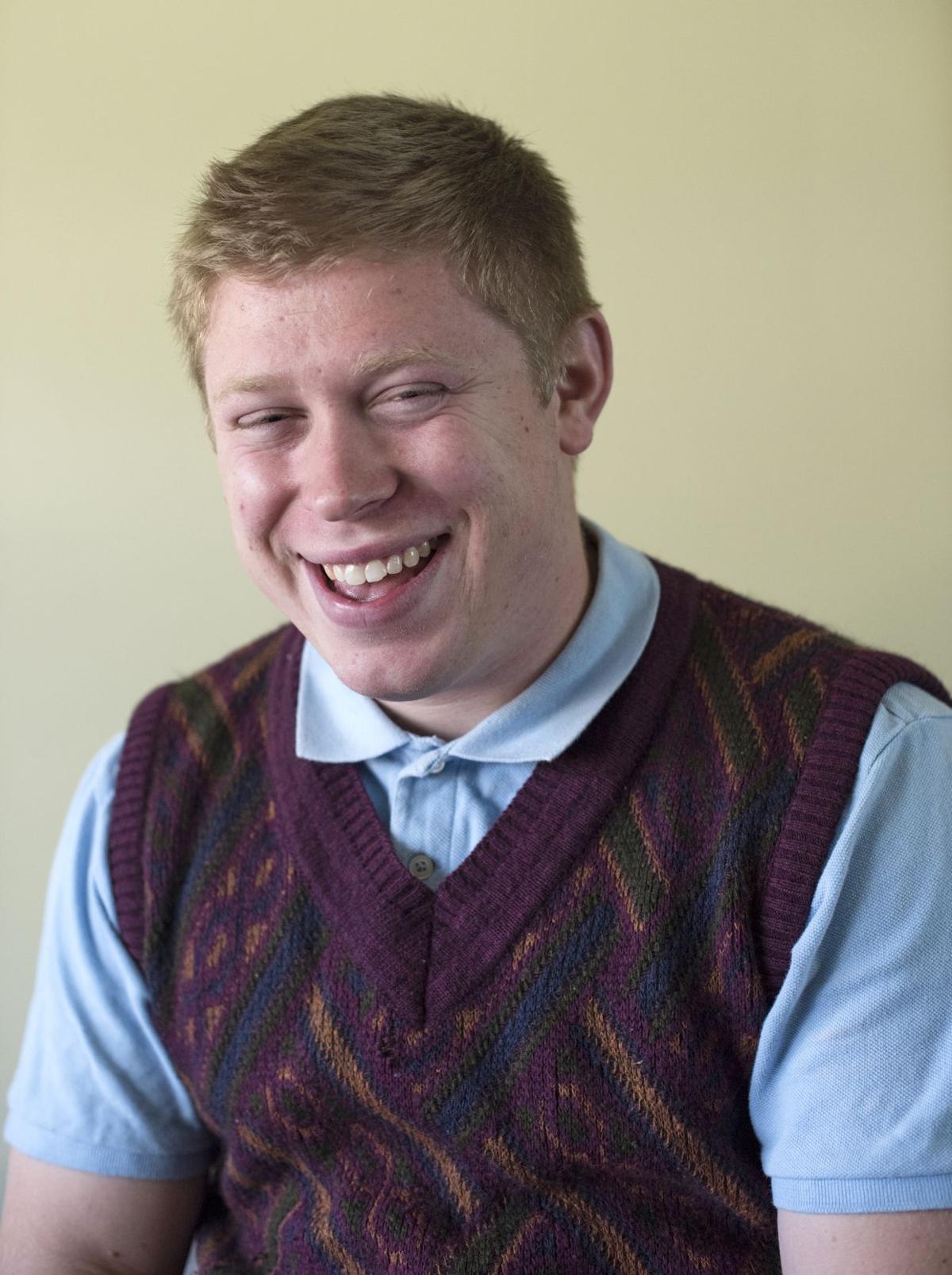 Kyle Craven, also known as Bad Luck Brian, became Internet famous in 2012 when a friend of his posted Craven's high school portrait online as a meme. The sweater vest from the original photo has been long gone, but Craven has an alternate that he wears during videos on his YouTube channel and when he makes appearances.

Kyle Craven, also known as Bad Luck Brian, became Internet famous in 2012 when a friend of his posted Craven's high school portrait online as a meme. The sweater vest from the original photo has been long gone, but Craven has an alternate that he wears during videos on his YouTube channel and when he makes appearances.

Actually, it vibrated, and because this is a story about the age of the Internet and the way technology can change our lives, it's important to get the sound right.

Kyle Craven slept. In his bedroom in northeast Ohio, he was just a 22-year-old a few months away from college graduation, ready to take a job at his father's construction company.

The call went to voice mail.

"Dude," his friend said, in the message Kyle would listen to the next morning, "I just made you Internet-famous."

Two years and eleven months later, Kyle is in bed again, missing a call. This time, it's from me.

If I get a blank stare in return, I pull out my phone and Google his picture.

It's a blond kid wearing a light blue polo shirt under a hideous red sweater vest, giving off the goofiest, braces-laced smile.

Above and below his head are the large white block letters that turn the goofy photo into a meme — a sort of one-panel cartoon in which the caption is rewritten over and over.

He is Bad Luck Brian. The way the meme Grumpy Cat is a symbol for being out of sorts, Kyle-as-Brian became a symbol for a stroke of hilarious bad luck. The text on his photos are mini-stories of a guy who can't catch a break, from bad bathroom humor to the wholly unprintable:

The first meme was posted to Reddit by Ian Davies, who has been Kyle's friend since elementary school. He took Kyle's ridiculous school photo, named it Bad Luck Brian (catchier than Bad Luck Kyle) and wrote "Takes driving test ... gets first DUI."

For reasons they will never know, the meme took off on Reddit, where users' votes increase a post's popularity. Before long, Bad Luck Brian was an Internet sensation. His face appeared on Facebook, blogs and advertisements. T-shirts with his photo were sold at Wal-Mart and Hot Topic. Companies made Bad Luck Brian paperweights and Bad Luck Brian stuffed animals. He was flown to Internet conventions across the country. People like me, who barely knew him in high school, bragged about his photo's popularity.

For three years, he has been able to capitalize on his unexpected fame. On the Internet, three years is a long time. It's enough time to let something become part of your identity — even when the online fame begins to fade.

We're supposed to meet the day after Christmas, so I call him on the 24th to check in.

The next day, he texts to say that he has the flu and had spent all day in bed. It was Christmas, and he still wasn't feeling very well.

The original print of the photo in question no longer exists, as far as Kyle knows. Once he's feeling a little better, we meet at his house, roughly 40 minutes outside of Cleveland.

From a bottom shelf, he pulls out a 2005-06 yearbook and flips to the pages with black-and-white photos of the junior class. In the bottom left corner of the page, there are two identical photos of Kyle. Neither has the goofy smile.

"Picture days were always fun days for me," he explains. He went to the Village Discount Outlet thrift store to buy a plaid sweater vest. He went to the gym to line up for his photo. He rubbed his face to make it all red, squinted his eyes, puffed out his jaw and took what he thought was a pure genius photo.

The principal did not agree. According to Kyle, the day the photos came out, she came up to him and said, "Picture retake day is tomorrow. You are expected to be there."

She knew the photo was a joke, as Kyle was a dedicated class clown for all of high school. He purposefully butchered a rendition of Hanson's "MMMBop" at the talent show. He rode a unicycle at pep rallies. He unwrapped packets of butter and threw them on the ceiling tiles of the cafeteria, so they would stick for a little while and fall into the hair of unsuspecting freshmen in the next lunch period.

"He was always kind of crazy," Ian says now. "Running around, trying to get a laugh out of people. He was always crazy Kyle."

Kyle and Ian scanned the ridiculous photo and saved it on their computers. Kyle went to retakes the next day, where he was forced to turn in the original picture. In retaliation, he convinced someone on the yearbook staff to put his photo on the page twice.

Today, he looks different from those school photos. His hair is shorter, and he has long-since been rid of braces. The most recognizable and entertaining aspect of the meme — the goofy smirk on Bad Luck Brian's face — isn't how Kyle normally smiles. That's why it doesn't bother him that all of the Internet is making fun of his face. The awkwardness of the photo was intentional. Without contorting his jawline and his eyes, he's just Kyle. He rarely gets recognized by strangers.

The people who enjoy Bad Luck Brian on the Internet don't seem to mind. He appears at conferences such as VidCon and Indy Pop Con, where he sells T-shirts while wearing a different sweater vest.

They look at the photo, look at him and squeal as if they've just won a backstage pass to the Internet.He takes pictures with thousands of these fans, and they tell him things like, "When my grandpa was really sick, I always looked at Bad Luck Brian photos to make me laugh." They thank him, as if he were the one writing and posting the memes.

He has been asked to let people use his picture for advertisements in Germany, Chile, Poland and Puerto Rico. Here, he has been part of ad campaigns for Volkswagen and RealPlayer. He negotiates all the deals himself.

Certainly not enough to live off, he says, "but not bad for doing basically nothing."

At his real job, Kyle, now 25, tries to keep Bad Luck Brian out of it.

Bad Luck Brian is the kind of guy who: "Plans his own birthday party ... isn't invited."

Kyle is the guy whose job is to build churches. That's what his father's construction company does. Kyle's a project manager, so he oversees the moving parts on building sites for churches of all kinds.

He works hard to be Kyle. After a day at a half-finished church, he goes home and writes things he needs to do on the dry-erase boards all around his office. He makes phone calls to contractors and makes copies of bills. He pets his dog, Louie, and examines blueprints.

And when his work done, he gets on Reddit.

If he scrolls for long enough, he always comes across the other version of himself.

There's no set course of action for what to do when a years-old picture of you gets mocked by millions of strangers.

"My parents reaction was, 'We've got to get them to take it down.' I had to explain that that's not a thing. It's not gonna work like that," Griffin Kiritsy, the face of the College Freshman meme, said in an interview.

Kiritsy was photographed for a 2007 Reader's Digest story about technology use. In 2011, the photo of him wearing a backpack and a University of New Hampshire hoodie went viral with text overlays such as: "Puts dirty dishes in the sink ... shocked to find them still there in the morning" and "Takes one political science class ... knows how to solve the world's problems."

As Kiritsy explained to his mother, there's no stopping a meme once it's viral. Attempts at lawsuits seem to succeed only when someone is using the meme for profit without permission, such as when Warner Bros. included the Keyboard Cat and Nyan Cat in a video game without paying the meme creators.

Bad Luck Brian's course was inspired by the meme Overly Attached Girlfriend, which features a brunette named Laina Morris in a green shirt with her eyes bugging out. The meme was born out of a Justin Bieber parody video, which has been viewed more than 17 million times.

Morris, who has used her meme fame to try and launch herself to further Web stardom, has 1.2 million subscribers to her YouTube channel. One of her videos is "Overly Attached Girlfriend Meets Bad Luck Brian."

Morris paid Kyle to fly out to Los Angeles and star in a video where the two memes go on a date together. Another YouTube star, one of the Brothers Riedell, also appeared.

"They were telling me about how much money you can make off YouTube," Kyle said. "And it seemed like a good time to start my own channel, so that Laina could say, 'Hey, check out Bad Luck Brian.' "

He saw YouTube as an opportunity to keep Bad Luck Brian going, a year and a half after the meme debuted. With the help of friends from high school, he made videos that played out some of the most popular memes, such as, "Doesn't forward a chain e-mail ... dies." He started Bad Luck Brian accounts on Facebook, Twitter and Instagram.

The videos took hours to film, edit and promote. The first three got more than 150,000 views. The next eight didn't break 45,000. The monthly checks with his YouTube revenue were rarely more than $100.

The videos slowed down. His job building churches picked up. He got married. They adopted the dog.

After a year, he stopped making videos almost entirely.

But occasionally, he still gets emails or phone calls from people who want to use Bad Luck Brian in an ad campaign. In December, there was one from a brewery in Bavaria.

As long as people keep sharing the picture, he'll keep encouraging it.

"It's something to show my grandkids one day, right?" he said.

So when he goes to sleep, his phone is never far. It could vibrate any time, alerting him to the next opportunity to keep him Internet-famous.