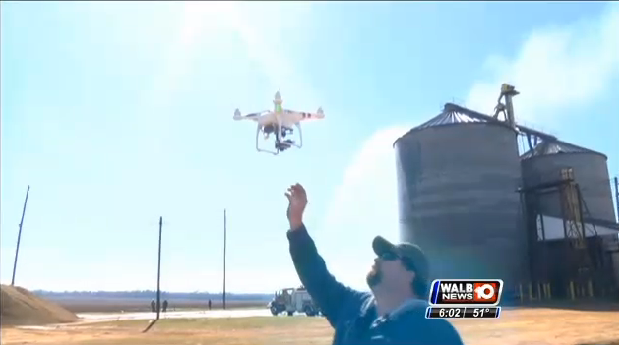 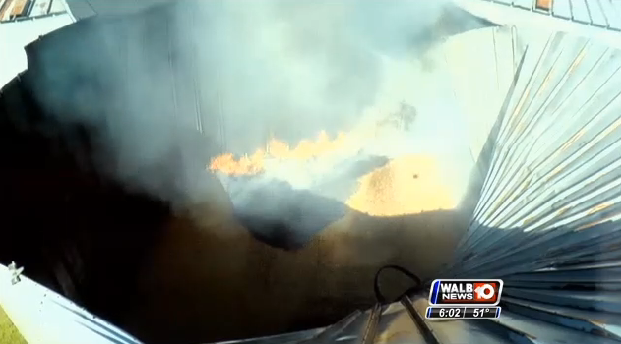 CORDELE, Ga. – Fire officials credit a camera-equipped, remote controlled drone with allowing them to quickly contain a raging fire that destroyed 900 tons of peanuts worth an estimated $750,000 in a storage silo in this south Georgia community. No one was injured.

The fire broke out early Tuesday morning at the GFA Peanut Company processing plant 140 miles south of Atlanta, causing concern it might spread into a nearby residential neighborhood that includes an elementary school.

Because the blaze had collapsed the roof of the silo and was burning inside the tall structure, firefighters could not climb atop to spray their water hoses directly onto the fire’s source in order to put it out.

The drone, supplied by a volunteer firefighter, hovered over the silo, snapping images that enabled a Georgia State Police helicopter to drop water bags from above onto the inferno, and allowing firefighters below to also more effectively battle the fire.

Willie Jackson, a Crisp County firefighter, said the drone gave a “bird’s eye view of where the bulk of the fire was coming from.” He said firefighters from three counties sprayed 600 gallons of water a minute at the source from below.

Sgt. Ben Bray of the Crisp County Sheriff’s Office said the fire’s smoke soon turned from dark brown and black to white, signaling that water was reaching the core of the blaze and cooling down the burning peanuts in the silo. He said the drone was a “huge tool, a huge help.”

Officials attributed the fire to chemicals recently applied to the stored peanuts, causing them to heat up and burst into flames. They said because peanuts contain nearly 50 percent oil the fire was intense. The destroyed peanuts smoldered for some time after the fire was extinguished.

GFA Peanut Company of Cordele is a major peanut processing plant. It supplies both wholesale and retail outlets, mostly for snacks and for making peanut butter. It is located 140 miles south of Atlanta.

There was no immediate estimate on the impact of the destroyed nuts on the peanut industry or market. Georgia is the top peanut producing state in the country, providing nearly 50 percent of all U.S. production.

The United States is the third largest producer of peanuts, behind China and India, according to the American Peanut Council.

Details for this story were provided by the Cordele, Ga., Dispatch and Crisp County officials.