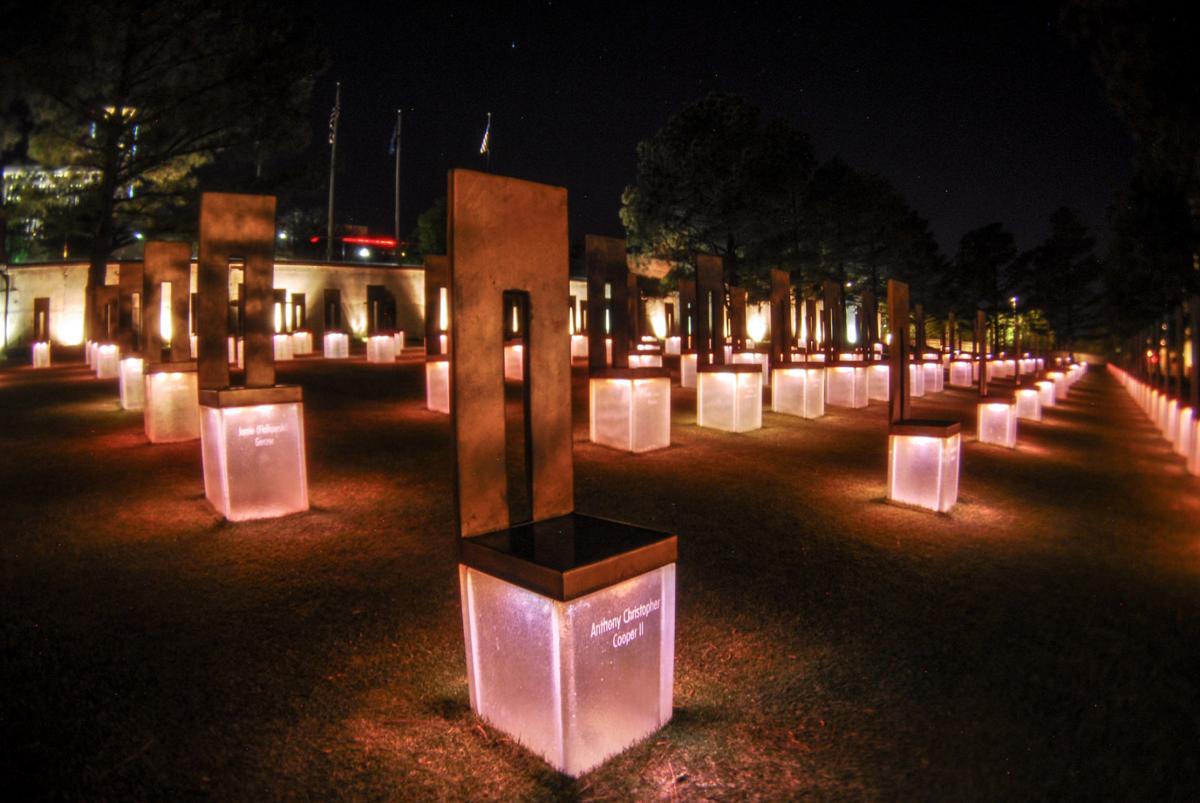 The 168 chairs at the Oklahoma City National Memorial represent the lives taken on April 19, 1995. Each chair is inscribed the name of someone killed in the bombing. (Kyle Phillips / The Norman (Ok.) Transcript)

The 168 chairs at the Oklahoma City National Memorial represent the lives taken on April 19, 1995. Each chair is inscribed the name of someone killed in the bombing. (Kyle Phillips / The Norman (Ok.) Transcript)

OKLAHOMA CITY — Nick Chafey doesn't remember much of his mother. The Oklahoma native was just four-years old when Rona Chafey died along with 167 others in the bombing of the Alfred P. Murrah Federal Building April 19, 1995.

Nick is one of countless men and women who are still feeling the effects of one of the worst terrorist attacks in the history of the United States 20 years later.

“Obviously growing up without a mother has been really, really difficult. The older I get, it gets more difficult,” Chafey said. “You do learn more about your mom. I was so little I had no memories. It's hard to hear those memories. They are good and funny memories. I'm grateful to hear them. It sheds more light on my mom and who she was. And that's what I''m trying to figure out.”

Rona Chafey was a Cleveland County Sheriff's Office Dispatcher who was working in a Drug Enforcement Administration State and Local Task Force at the Murrah building 20 years ago.

While Nick Chafey was too young to remember what took place that day, William Joseph Wallace Jr. had a front row seat to the carnage and damage created by Timothy McVeigh and Terry Nichols 20 years ago. Working as an emergency medical technician (EMT) in Oklahoma City, he was in his ambulance six blocks away when the bomb at the Murrah Federal Building was set off.

Wallace said it took him a couple of minutes to get within a block of the Murrah building and it hit him immediately the magnitude of what had just taken place that April 19 morning.

“At that point we got flooded with people,” Wallace said. “There was glass all over the roadway and a lot of people had blood all over their faces and were screaming “Help me! Help me!” Some were pointing and saying “There is someone in there trapped.” I ended up spending the first hour, hour and a half or so of my day inside the Journal Record building. I helped some people out, carried some people out, did a lot of treatment, and sent people off on other ambulances. I wound up spending my entire day down here."

“I had been at EMSA for two years almost and a paramedic for six months and I got a career’s worth of experience in one day, unfortunately.”

Melody Sprule was also working for Emergency Medical Services Authority (EMSA) in 1995. However, on the day of the explosion, it was the dispatcher's day off.

But that didn't matter to Sprule. When she got word that there had been an explosion, she didn't hesitate to head to work.

“I felt the explosion at my house and instinctively put my uniform on and called and said 'Am I needed?' and they said yes,” Sprule said. “I started driving down here and I was at work by 9:20. When I got downtown I could still see everything in the air. The ash, the plume of smoke, and everything was still up there. It was surreal. Unbelievable. I still didn’t have all the facts so I didn’t really know how big it was, but it was so close to my work and that is what first struck me, but secondly was the looks on everyone else’s faces that I saw downtown. It just got my heart because I knew something was really wrong.”

Yet, Sprule said it took almost 18 years before she was able to return to the bombing site or visit the Oklahoma City National Memorial.

“I came here to the Memorial only a couple of years ago because my daughter made me come,” Sprule said. “Before that, I couldn’t even go to the Post Office around the corner for years because I would cry if I talked about it or came down here. I have books about it. A book that stands out is "In Their Name" and I couldn’t open it.

" In fact, I have still never read it because I would cry. I finally got to where I wouldn’t cry. One day I was driving to work and it was raining and I saw a red ball, a kid’s ball, floating down the street and I started crying. It took me a minute to figure out that it was because there was no child with that ball. I remembered the playground with all of the kid’s toys and no kids playing on it. Even now I am about to cry.”

Everything Wallace saw that day has stayed with him. Even now as he is one of the few EMT workers from that day with is still with EMSA, he says his life has been shaped by what took place April 19, 1995.

“There are a lot of memories you don’t really share with family or even friends,' Wallace said. “There are a lot of things that you see that you don’t really want to describe, but the images will always be in my head. A lot of people got out of the business after this, and I’ve used it to make a career out of it. It is not necessarily something anyone wants to see, but it certainly gave me the insight that I knew I was doing what I liked to do.”

As the anniversary of the bombing gets farther and farther away, more and more people forget what transpired or how horrific that day was. Sprule doesn't want that to happen.

“I want them to remember that everybody mattered,” Sprule said. “A lot of people maybe didn’t know that secretary’s name but she mattered. Her family mattered. Everybody that was affected by it, everybody that died, their families that were left behind, all the injured people, the people that responded, they live with that every day even when you push it to the back of your head. I don’t want people to forget, because everybody that was here that day mattered and they are going to continue to matter.”